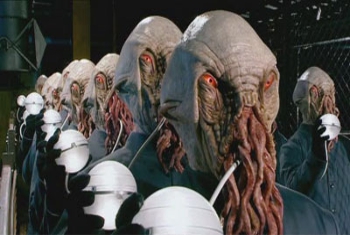 The circle must be broken...
Donna: It's weird, but... being with you, I can't tell what's right and what's wrong anymore.
The Doctor: It's better that way. People who know for certain tend to be like Mr. Halpen.
Advertisement:

The one with An Aesop about the value of brains, both big and small (literally)...
and a Portent of Doom.

The Doctor and Donna land on a gorgeous snowy world— your favourite alpine vistas, cranked up to 11— 4126 AD, the time of the Second Great and Bountiful Human Empire. It is the Oodsphere, home planet of the Ood, the apparently willing slave race we first met in "The Impossible Planet"/"The Satan Pit".

All is not well on the Oodsphere. Ood Operations, Ood suppliers to the three galaxies, are sitting on a disturbing fact: Ood everywhere have been going berserk and killing their masters. The only symptom is that the Ood's eyes will turn red just before it snaps.

The Doctor and Donna sneak off to interview some Ood, but the only hint the Ood themselves can give is that "the circle must be broken"note  By and by, Lord; by and by... . The Doctor and Donna discover, to their horror and disgust, that the process that wild Ood undergo to turn them into slave Ood is... lobotomy. The communication orb isn't just an addition to their bodies: it's a replacement for their second, external brain. The Doctor gently connects to Donna telepathically and helps her hear the collective mind-song of those Ood that are still intact.

But even the unaltered Ood are being restrained somehow— something is holding back their song. That's when they come across the third brain of the collective Ood consciousness, a giant mass imprisoned in a ring of machinery and electricity: the circle which must be broken.

They save the Ood using the tried and trusted method of blowing things up, hear their Song of Freedom, and receive in return a cryptic message about the Doctor's song ending soon.

Alternative Title(s): Doctor Who NSS 4 E 3 Planet Of The Ood