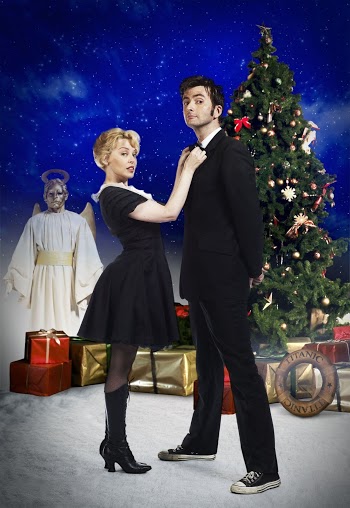 The one with the cyborg cactus. Ohh... sorry, that's racist. Let's try again.

The one where if Jack was around when the ship went down, we wouldn't have to worry about him freezing to death. ...No? Hey, at least this Jack can come back to life! And he wouldn't drown in the cold vacuum of space, either! He'd just... die repeatedly and come back to life... each time with his blood freezing in his veins and the fluids in his eyes boiling... This is getting us nowhere.

*sigh*... Okay. One last time. The one with the Titanic. IN SPACE!
There we go!note Also known as the one where the Doctor makes a fabulous speech and Kylie Minogue gets burned alive.

Just as Earth exoticises other cultures, apparently, aliens exoticise Earth culture. Or the parts of Earth culture they like, stuck together willy-nilly so that the end result is a charming Earth Christmas pleasure cruise... set aboard a spaceship recreation of Earth's most famous ship, the RMS Titanic.

The Doctor, who's appeared aboard after his TARDIS accidentally crashed into it at the end of the last episode, can recognize a dire portent when he sees one. He quickly repairs the damage to the TARDIS' interior and then properly materializes on board the ship, donning his tuxedo (in spite of his bad luck with wearing them) to blend in with the crowd. He befriends several of the guests on the ship, including the lovely Astrid Peth, a waitress that has taken this job to further her dream of travelling through space and seeing the stars. Although he's a stowaway, the Doctor dons his best tuxedo and poses as a passenger with privilege... Now if only his tuxedo weren't a calling card for bad luck...

The ship's historian, Mr. Copper, offers to show a group of people on board the Titanic a tour of Earth, using a teleporter system and matching bracelets for those who want to explore the planet as the ship orbits the pretty blue world. Except, Mr. Copper has very little accurate knowledge about the Earth after spending his life on Sto (it later being revealed he got his degree from a diploma mill). The Doctor goes down with the party to London, and is concerned when he finds the normally packed streets are totally deserted. Except for the newsstand vendor on the street where they've landed, Wilfred Mott, who tells them that after two prior Christmases with alien invasions, the populace of central London has chosen to flee to the adjacent home counties, leaving the shopping district a ghost town. A newscaster is reporting that the Queen is also staying put in Buckingham Palace this year to show the public that there's no reason to fear, and Wilf is probably the only other person besides her willing to take a chance. The Doctor assures him, "Far as I know, this year, nothing to worry about-" only for him and the rest of the landing party to be instantly teleported back to the Titanic. "Then again..." Wilf mutters.

Just when the Doctor and company return to the Titanic and are all set to enjoy a relaxing cruise around the Earth, the ship's captain, Hardaker, sets the trouble into motion. He deactivates the spaceship's shields, then magnetizes the hull to purposely attract three blazing meteors so they crash against the ship, in league with his boss' evil plan to destroy the Titanic. The captain is bound and determined to kill himself; he's already terminally ill, and because of the life insurance being offered for his family as compensation, that's all it takes to extinguish whatever hope is left for him to keep on living and carry out this kamikaze mission. The Doctor notices the meteors and tries to alert the captain, but a steward forces him away from a system he isn't authorized to use. He rushes over to a singer's microphone and at least manages to make a few heads turn with the warning they're in danger. These smart few people follow him to safety. Midshipman Alonso Frame tries to stop the captain from destroying the Titanic, but gets shot for his efforts. The captain reaps his death wish, while many, many more people are decimated by both the resultant meteor rain creaming sections of the ship... and the once-docile Heavenly Host carrying out orders to kill off everyone on the Titanic. From this point on, all hell breaks loose. The Doctor tries to mount a rescue operation, but the damage to the Titanic jars his TARDIS loose from the wreckage, where it follows its programming to head towards the nearest source of gravity, in this case Earth. Now, he has to do things the hard way and navigate everyone through the forsaken vessel while Heavenly Hosts are running amok.

The Doctor has the usual motley collection of eccentrics around him: Astrid, Happily Married contest winners Morvin and Foon van Hoff, Jerkass Rickston Slade, Mr. Copper the alleged Earth expert, and Bannakaffalatta, the spiny red cyborg (though don't tell anyone). They first try to make their way to the bridge, which is now under the inexpert, if enthusiastic, command of one Midshipman Frame, after the captain's untimely death. But one of the rogue Heavenly Hosts is coaxed by the Doctor into revealing that the real source of evil leadership is on Deck 31. Now they must defy the dying ship and the creepy angel robots to get there.

And creepy they are. When a pocket of survivors comes to Midshipman Frame's attention, he can't do much more than listen helplessly as the angels kill them.

Still, they haven't spotted the Doctor et al yet, as the motley crew sneaks through the ship's secret passages.

Of his bunch, they are quickly picked off. Morvin falls to his death in a reactor, followed by Foon, who refuses to survive without her husband and decides to take the plunge, too, taking a Heavenly Host with her. Bannakaffalatta gets over the cyborg prejudice he faced and makes a Heroic Sacrifice by using his power core to disable the Heavenly Host, which drains it and causes him to perish only minutes later, saying goodbye to his crush Astrid. Mr. Copper takes Bannakaffalatta's core to use as a weapon against the Heavenly Host. Rickston continues to bitch and moan and get in the way, being insufferably selfish. The Doctor discovers that he gets to ask the Host three questions by prodding around and discovering a protocol loophole that forces them to reveal information at his request, but, he wastes two of them. Eventually, Deck 31 is reached and proves to contain the Titanic's ludicrously wealthy yet cyborgified and unhappy owner, Max Capricorn, who is bent on crashing it into Earth and riding out the collision in an impact-proof chamber, in a complicated revenge scheme against his company's board of directors who cast him out. And the Doctor is powerless in the arms of the robot angels, so Astrid has to take the Heroic Sacrifice on herself.

With Capricorn dead, the Doctor now has full command of the Host, who have defaulted to the next highest authority, and messianically spreads his arms to have the angels carry him up to... the bridge. It's time to stop the Titanic from crashing. The Doctor comforts the wounded Midshipman Frame and asks what his name is... to his wonderful delight, it's Alonso. With an "Allons-y, Alonzo!", the Doctor does everything he can with Alonzo to regain control of the rapidly crashing starliner before it creates a nuclear catastrophe, while the surviving passengers — and Rickston — hang on for dear life. The Doctor really knuckles down when the ship crosses through Earth's atmosphere. He calls Buckingham Palace to have it evacuated and even manages to keep the Titanic from crashing into London. The Queen waves at him as he sails past, thanks him, and wishes him a "Happy Christmas". Poor Wilfred Mott, who still remembers what his granddaughter went through last year, shouts in outrage at the sight of the ship as those aliens threaten to antagonize the third Christmas in a row.

After the storm has been weathered, the Doctor learns that Astrid still has a chance of survival. The teleporter system has a safety feature. In case of an accident, it stores a passenger's molecules safely. Astrid was wearing a teleporter bracelet when she fell to her doom. The Doctor desperately sonics the teleport system, but the disaster that befell the ship has severely damaged the system and it isn't responding. Unfortunately, when the Doctor tries to recover Astrid to a physical body, she gets stuck in between life and death. Mr. Copper has to make the Doctor stop trying in vain to get Astrid back as she was — the system is just too far gone to make it possible. All that's left is an echo of Astrid with the ghost of consciousness. Astrid gets a final kiss from the Doctor and becomes stardust as he scatters her remnants into space, so Astrid can enjoy her dream of seeing the stars and traveling the universe for eternity.

Rickston, being an opportunistic slimeball, has pulled up his stakes in Max Capricorn Cruiseliners. Instead, it turns out he invested all his shares in Capricorn's rivals, who have seen their stock prices go up in the wake of this incident, making the ungrateful turd filthy rich. Luckily, Rickston takes the best course of action in the whole time we've known him — he leaves. Mr. Copper tells the Doctor that although people like Rickston may survive, it would be wrong to decide who lived and died. Such power would make somebody a monster. If only the Doctor didn't forget so easily.

The Doctor and Mr. Copper finally walk away from the crash and step onto Earth, gazing at the site of London by the water. As luck would have it, the TARDIS knew where to land, too. It is right there, waiting for the Doctor. Once again, it is not snowing on Christmas. That's the ballast from the Titanic's water tanks. The Doctor properly educates Mr. Copper on Earth knowledge, this time letting him stay in a place where he's sure to get it right. Mr. Copper asks if he can come along in the TARDIS as the next companion, but the Doctor really doesn't want any more companions right now, after having all the of the previous ones either lost forever or in love with him or both. However, Mr. Copper also happens to have £1,000,000 in his bank account, so he probably won't be struggling in the future. It's the end result of a life as a travelling salesman and lying about a degree in "Earthonomics" that netted him the job of Ship Historian and a credit card that would pay for anything the passengers wanted when they teleported onto Earth. In fact, he's jumping for joy. See? Karma works both ways. But neither Mr. Copper nor the Doctor will ever forget Astrid. The Doctor goes on his merry way, wishing, "Merry Christmas, Mister Copper."

Information: This episode contains examples of the following tropes: