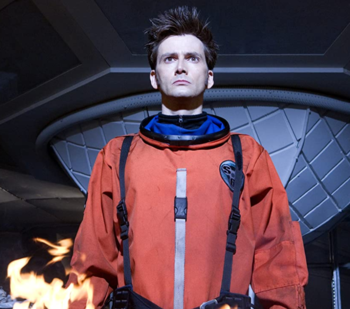 The Timelord Victorious
"We're not just fighting the Flood... we're fighting time itself! And I'm gonna win!"
— The Doctor
Advertisement:

The one where the Doctor goes too far.

The Doctor steps out onto the surface of Mars, wearing a very familiar space suit. He's come to Mars on a whim, and quickly finds himself looking upon a human colony called Bowie Base One (looks like there really is life on Mars). He's captured right away, though, by a little robot called Gadget and taken to see the person in charge of the base: Captain Adelaide Brooke.

The Doctor thinks that the cutesy robot is rubbish (although robot dogs are cool, of course), but otherwise loves the base. It doesn't take long for the Doctor to realise exactly where he is, and when: November 21st, 2059. Captain Brooke and her crew are the first human colony on Mars. The Doctor is a huge fan of their trip, and as he rambles through their history while madly squeeing, we see flashbacks to a series of articles with obituaries. The crew will die here today. The Doctor knows it — and knows that he shouldn't interfere, because this is a tremendously important fixed point in time. He'll never know what kind of monster attacked them, but that's fine, and he'll just leave now.

People go missing. One by the name of Andy is already dead. Another, Maggie, is found conked on the head and taken off to the medical dome. The Doctor should leave now. But he lets himself be roped into the investigation by Adelaide, into the bio-dome, joined by Expendable Crewman Tarak. Within a good few minutes, Tarak is separated from the Doctor and finds what appears to be Andy... water flowing off of Andy like he's a theme park ride. Andy's face is distorted, cracked and gushing water.

The Doctor keeps making vague excuses about how he has to go.

Maggie, deep in an isolation room, also shows signs of... whatever this is. She's freaking out the base's nurse, Yuri. He contacts Adelaide, and she realises it's best to leave the dark, scary giant building with lots of places for something to jump out at them. But they make one last look around for Tarak... and find him in the same water-zombie state as Andy, who is standing right next to him, or what used to be him. Dragging Adelaide away, the Doctor announces it's time to run, and they barely escape the two infected humans.

They lock the two infected forms out of the main central dome. These water creatures, Maggie included, are demanding to go to Earth — where they can thrive in water. The Doctor raises up the question of who else is infected, if the virus/parasite/whatever isn't inside everyone else on the base already, as it thrives in the water and obviously came from the Martian water that everyone has been drinking. Adelaide goes off to check the ice cap on top of which the base is built, while the rest of the crew begin prepping for escape to Earth. The Doctor knows that he should be leaving, but he decides to run off and join Adelaide instead, seeing as he can't leave without his spacesuit.

At the ice cap water extraction dome, the Doctor and Adelaide look out over a rather impressive ice cap while the Doctor rambles about some old enemies of his — the Ice Warriors. Adelaide begins to question the Doctor about why he's so eager to leave and how he knows so much about the Mars colony. The Doctor explains that this is a "fixed point in time", confusing the hell out of Adelaide for a few moments before the Doctor quickly changes the subject to why Adelaide came out into space: The Dalek Invasion of 2009* "Present day" episodes in the Russell T. Davies era were usually a year ahead of their broadcast dates. "The Stolen Earth" was broadcast in 2008 and set in 2009. http://tardis.wikia.com/wiki/21st_century_Dalek_invasion

. She looked into the eyestalk of a Dalek, it looked right back, and left her to live. Adelaide simply wished to follow that Dalek out again — not to kill it, but to meet other creatures in peace.

The Doctor rambles on about how awesome Adelaide's descendants will be, all inspired by her heroic journey to Mars, and how massively important they'll all be to the future of all time and space. More newspaper flashbacks. It freaks the hell out of Adelaide in general. In seconds, it's revealed that everyone else still alive doesn't have the virus — so it's time to start leaving!

...or it would be, if the infected bodies that were once Andy and Tarek didn't climb up on top of the central command building to start spewing water everywhere.

The Doctor, now with space suit, finally starts to leave... but Adelaide refuses to open up the airlock hatch until the Doctor explains why he's being so awkward around everyone. He explains it all for us (and Adelaide): this very day is the day that Bowie Base One is destroyed with all hands lost. Adelaide's heroic death is what will inspire her descendants and what will propel humanity into interstellar travel. It has to happen.

The Doctor leaves solemnly, listening through his helmet to the attempts of the remaining crew to fight fate the best they can. He hears about the water seeping into the main control room, taking out another member of the crew. Yet another is infected as a single drop hits his face — and this one demands the crew leave him before he's infected. The pilot of the shuttle, Ed, is also infected — but chooses to blow up the shuttle rather than let the Earth get infected. The resulting explosion traps our remaining three crew-members in a single storage room, and knocks the Doctor quite a good distance.

All looks grim for Adelaide, Yuri and Mia... until the Doctor walks into the storage room, shouting out orders like a maniac and trying to save those people he'd declared dead. Adelaide begins to panic, wondering why the Doctor is throwing his previous worries out the window. Almost foaming at the mouth, the Doctor launches into a speech about how there are laws of time, but he can warp them. He's safe, he knows it's not his time yet, because he'll be killed when someone knocks four times. So today, he's decided that as many people as possible are going to be safe too! The laws of time that were once enforced by a group of people — a group long since dead:

The Doctor: Do you know who that leaves? ME!! It's taken me all these years to realise it, but all those laws of time are mine. And they will obey ME!!!

Adelaide believes that the Doctor's gone insane. Gee, whatever gave her that idea? The Doctor declares he's also fighting time itself. Not even close to giving up, the Doctor finds that robot buddy Gadget in storage and uses it to bring the TARDIS to him — even while Adelaide sets the base to self-destruct. With four seconds to go, the TARDIS begins to rematerialise. As it finishes, the countdown reaches zero, the base blows up and the TARDIS whisks everyone away.

The Doctor takes the survivors to Earth: same time, same day. Mia, unlike many companions of the past, utterly freaks out at the TARDIS itself and flees — Yuri running after her. The Doctor himself is all grins and smiles, proudly proclaiming how time now obeys him. In recognition of his new exalted status, he gives himself the new title of Time Lord Victorious. Not only did he save two of the "little people", but he also saved one of the "big ones".

Adelaide does not take this well, trying to reason with the Doctor — claiming that no one person should have so much power. However, she just cannot get through to him, as the Doctor is finally realising everything that he can do, all that he can accomplish. He can warp time, escape death, open up the door to Adelaide's home.

Adelaide simply glares at the Doctor and enters her own home. A blue flash through her windows makes it perfectly clear just how the Doctor's hubris will be repayed.

Thoughts flash through the Doctor's head of reading about Adelaide's once noble death, and that of the two crew members who originally didn't make it. They begin to change, and his face gleams with horror. His fond memories of Bowie Base One's sacrifice have been rewritten... for the worse. The Doctor breaks, realising that he's gone too far. Ood Sigma appears for a moment, and the Doctor questions him, wondering if this is when he's supposed to die.

Ood Sigma simply vanishes, leaving a distressed and panicked Doctor to dash into the TARDIS and lock the door behind him. The Cloister Bell begins to go off, but the Doctor declares "no" and valiantly throws himself into his final episode.

This episode is considered one of the best in the Tenth Doctor's era, and played a key part in the story of Time Lord Victorious, a multi-platform event spanning the books, comics, a web series, the audios and interactive experiences. For the Tenth Doctor this event takes place immediately after this episode and shows him continuing down the dark path he started while his Eighth and Ninth incarnations try to stop him.

Alternative Title(s): Doctor Who NSS 4 E 16 The Waters Of Mars