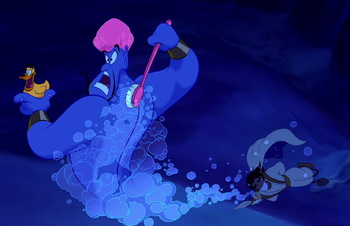 "Never fails. You get in the bath, and there's a rub at the lamp."note At least the ocean kinda counts, right?
"Now, Twilight, you know Celestia told you to give me a heads up before summoning me with that little spell she gave you."
— Discord (while he was taking a shower), My Little Pony: Friendship Is Magic, "Princess Twilight Sparkle, Part 1"
Advertisement:

You know how phone calls can come at the most inopportune times? Well, imagine instead of just ringing, it physically teleported you mid-action to the location of the caller. You'll be lucky to be fully clothed, and that's ignoring what dull or dire situation the caller wants you to help them solve.

This is the case of the Inconvenient Summons. The summoned character may be a genie with an impressively well stocked lamp/home, a summoned entity with his/her/its own life on their home plane, or even a human courtesy of some kind of Teleportation / magic.

Potential interrupted activities can be anything, but a few common ones include:

This trope is a leading cause in summoned sidekick snarkery. For some reason the reverse is rarely true — that the summoned character gets pulled out of a sticky situation. This trope can be seen as something of a deconstruction of the idea that the summoned character has no life or existence while un-summoned. Unless the character is literally created from nothing, or taken from/put in an empty timeless void, they've got to be up to something all that time.

For a (slightly) less annoying badly-timed communications, see Kinda Busy Here. Can also overlap with Interrupted Bath, where your basic shower/bath gets interrupted by an event.

"The Turmoil of the Beehive"

Nope, he could not have waited just a BIT longer...!

"The Turmoil of the Beehive"

Nope, he could not have waited just a BIT longer...!