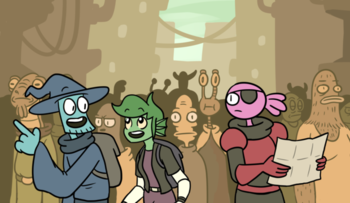 From left to right: Isaac, Minnow and Val.
Val and Isaac

is a Science Fantasy comic, originally hosted on the Tumblr blog of Tredlocity

. Some of the comics can also be found on the creator's Twitter

Val and Isaac are space mercenaries: Val is a gun-toting, one-eyed badass, while Isaac is a studious wizard. Occasionally, the comic shows them doing their merc work, but the strip is largely dedicated to Slice of Life antics.

Despite the title of the strip being Val and Isaac, Isaac's role tends to be more that of a secondary character, with the most focal characters being Val and Minnow, the cyborg fish girl who works as the ship's engineer. Also features a Comically Serious assassin named Space Dread.

Notable for having mostly same-sex relationships.