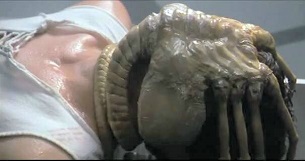 Give us a kiss!
"I hate these aliens, they're so scary! Luckily, I can't see them! Something's covering my eyes but I can't quite figure out what it is!"
"Ewww! Talk about sucking face!"
— MAD parody of Alien: Resurrection
Advertisement:

The Face Hugger, as the name implies, is a creature that preys on other species, usually humans, by attaching itself to their face. What it does to you from there depends on the creature and how it operates. Some take over your body or mind in some fashion. Some drain you of blood or Life Energy. Some eat your brains. Some transform you in horrific fashion. And some will give you a Face Full of Alien Wing-Wong.

In pretty much every case, this is Nightmare Fuel owing to our Primal Fear of Orifice Invasion. See also Personal Space Invader. A creature that does this is frequently the larval form of a Xenomorph Xerox.

Rick and Morty intercept a distress call and upon arrival encounter one of the face huggers from the Alien movies.

Rick and Morty intercept a distress call and upon arrival encounter one of the face huggers from the Alien movies.