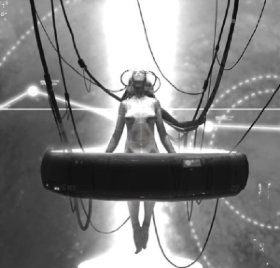 Karan's not a Spaceship Girl, but she does come very close.
"PAIs tend to be able to present more natural user interfaces than the expert systems they compete with, tending to be at least vaguely self-aware, and much more responsive to and on emotional levels. In particular, niche market and custom built models are limited only by legislation requiring that entities surpassing a specified set of standardized metrics cannot be considered property, and must be registered as either custom children or custom dependent employees. While the difference is clear for low end models, standards aside, most will agree that the line between a high end PAI and a designer cyborg human is exceptionally blurry."
— Vega Strike description of the Pseudo Artificial Intelligences

Digital processing technology has come a long way from the days of mechanical relays. Transistors, those magical little things that make modern computers tick, have gotten so small we can measure their size in individual atoms — small enough that we can cram a lot of them even in devices that fit in the palm of your hand. But despite our best advances, Father Science's thinking machines are still leagues behind those of Mother Nature. Even as flash memory and transistor technologies are close to reaching their absolute limit

, the human brain still casually humiliates our most cutting-edge devices with its immunity to EMPs, its absurdly low 20 watt power consumption and its storage space large enough to hold the entire internet.

But what if we told you there's a way to take a shortcut past the constraints of electronic computing and hold unimaginable processing power at your fingertips? You can do all of that and more with the Wetware CPU... at least as far as Science Fiction is concerned.

Wetware refers to a biological system. A Wetware CPU is the brain and nervous system of living beingsnote typically human beings, because if we'll create an affront to nature and humanity, we might as well not be pussies about it and go the whole hog used to power non-organic machinery. In speculative fiction settings, particularly those where true artificial intelligence either doesn't exist or is shunned, it's sometimes the case that the brains of living beings, sapient or not, will be incorporated into machines and used for processing or command and control purposes. It varies whether the rest of bodies are retained, or how willing the beings in question are. When used on unwilling subjects, it may be an element of Sci-Fi Horror, particularly Body Horror or And I Must Scream scenarios.

Related to Brain in a Jar, Man in the Machine, and Cyborg Helmsman. Compare Brain–Computer Interface, Living Battery, Unwilling Roboticisation, and Human Resources. Contrast Brain Uploading, where instead of using human "wetware" to run machine software, you use machine hardware to run human "software". Also contrast Wetware Body, where a machine controls an organic body instead of the other way around. Finally, also contrast Tinman Typist, where a machine occupies the workstation of a human instead of the latter being wired into where a machine should be.