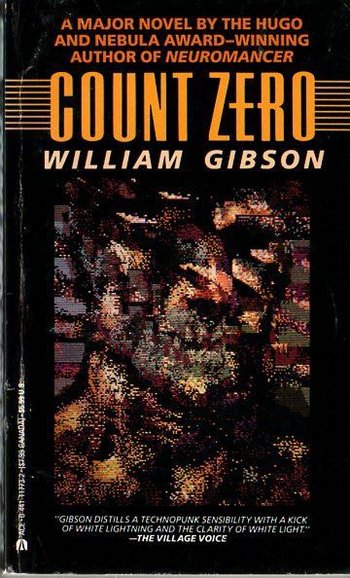 First Edition Cover
"On receiving an interrupt, decrement the counter to zero."
Advertisement:

Count Zero is about a freelance mercenary named Turner. After a botched job destroys much of his body, he is given a new one by his employers and enjoys some well-deserved R&R with a beautiful woman on the Mexican coast. Against his wishes, his vacation is cut short when his handler Conroy sends him on a job to extract a talented scientist from Maas Biolabs.

Wait, no. It's about the art dealer Marly Kruschkova, recovering after being victimised by a con artist. To her astonishment, she is contacted by the insanely wealthy Josef Virek, a man who's a megacorp unto himself. Virek hires her to find the creator of a set of the Virek Collection, a set of wooden boxes containing miscellaneous items, with a near-unlimited budget and no deadline.

Wait, no. It's about the wannabe console cowboy Bobby Newmark. After narrowly avoiding death twice, he finds himself in over his head in a world of computer hackers, shady dealings and voodoo gods.

It's a complicated book, to say the least.

Count Zero is the 1986 sequel to William Gibson's Neuromancer, and the second book in the Sprawl Trilogy. While not as well known as Neuromancer, it's considered by many Gibson fans to be even better.