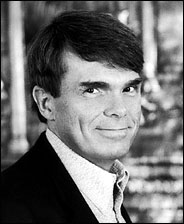 One notable aspect of Koontz' writing is that almost anytime there is a supernatural occurrence, its explanation, as outlandish as it might sometimes be, is usually physically possible, at least in theory. Very rarely does his work tread into outright fantasy (a notable exception being the Odd Thomas books, which include real ghosts).

On the Sliding Scale of Idealism Versus Cynicism, his works fall pretty far on the Idealistic side despite the disturbing content found within the stories and the fact that the villain has usually no redeeming qualities. The heroes, on the other hand are always brave, highly intelligent, compassionate and admirable human beings whose virtues vastly outweigh whatever flaws they might possess. Common themes and messages in his books usually revolve around overcoming adversity rather than feeling sorry for oneself, and living life to its absolute fullest. This sense of idealism is contrasted by having one or more characters reflect on the decline of modern society over the past twenty or thirty years due to sex, free drugs, or liberalism in general. However, despite such musings, the worlds created by Dean Koontz seem to be populated with genuinely good people who are always willing to help a friend in need. If his protagonists have any flaws, it is a specific insecurity that is holding them back. These insecurities can often be traced back to events from the character's childhood, and through the course of the story the character must work through these insecurities in order to achieve their dream or to otherwise live full and happy lives.

Dogs feature heavily in his works, and in his personal life. He has stated on Facebook that while he loves cats, he has a life-threateningly severe allergy to them. This is why feline characters rarely appear in his writing, as stated by him.

His story "A Mouse in the Walls of the Global Village" was included in Harlan Ellison's anthology Again, Dangerous Visions.

Koontz's works with their own trope pages include:

Other works by Dean Koontz provide examples of: