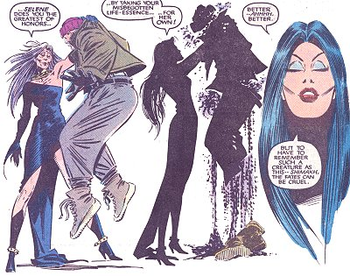 "How many years must I take from you before you tell us what I wish to know? Or shall I take them all?"
— Wraith Queen, Stargate Atlantis
Advertisement:

This character maintains immortality by consuming some vital force from their victims. This is often Life Energy, but can also be their souls, or youth or blood. If such an immortal doesn't feed, they will eventually die.

There is often some sort of conservation of lifespan where the victim's life is added to the immortal's and the victim dies so that the immortal can continue to keep living. This form of immortality usually grants eternal youth and the feeding process may cause the victim to grow older because the victim's youth is being drained into the immortal. Sometimes, it might extend the drinker's lifespan on a 1-to-1 ratio for the number of years stolen from the victim, but oftentimes it's quite inefficient and draining a victim who could potentially have another thirty or forty years of life only provides an extension of months or even weeks. No Immortal Inertia is often the result when this type of immortal is destroyed. May overlap with Vain Sorceress if it's used to restore their beauty as well.

Although this type of immortality could be described as vampiric (and indeed it overlaps with Vampiric Draining), only sometimes does it apply to actual vampires. Vampires usually won't die from a lack of blood - at most they will become weaker and suffer from Horror Hunger. May overlap with Blood Magic (especially Blood Baths) and Liquid Assets. Might also involve an Artifact of Doom or Evil Weapon.

Subtrope of Soul Eating and Immortality (and also Immortality Immorality). Contrast The Ageless, in which the immortal doesn't age to begin with and doesn't have to bother with taking others' lifeforce, but can usually still be killed conventionally.