Film / The Man Who Turned to Stone 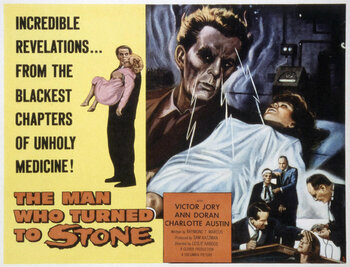 The Man Who Turned to Stone (a.k.a. The Petrified Man) is a 1957 American black-and-white horror science fiction film directed by László Kardos and starring Victor Jory, Ann Doran and Charlotte Austin.

When a new psychiatrist is hired at a women's prison, he and a social worker begin to puzzle over some recent suspicious deaths among the young inmates. The prison warden and doctor seem to be behind a centuries-old evil plot to steal the life force of young women to extend their own unnaturally immortal lives.