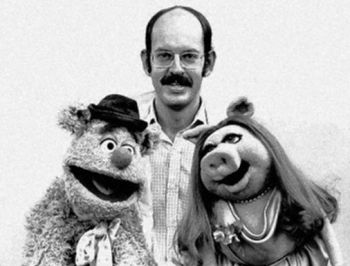 Frank Oz with Fozzie Bear and Miss Piggy in 1977. (Frank's the one in the middle.)

After moving to America with his family as a child, he grew up surrounded by puppetry. His parents were both puppeteers (his father Mike Oznowicz even served a term as the president of Puppeteers of America), and he performed in puppet shows as a teen at the Children's Fairyland amusement park in Oakland. After befriending Jim Henson he joined The Muppets in 1963 and is still technically involved with the organization (though he retired from regular performing in 2001).

He is most famous for his puppetry and voice work in The Muppets and Sesame Street, and as Yoda in the Star Wars franchise. He has also had success as a film director.

Frank Oz and his works provide examples of:

"The Force is strong."
"Wocka Wocka!"