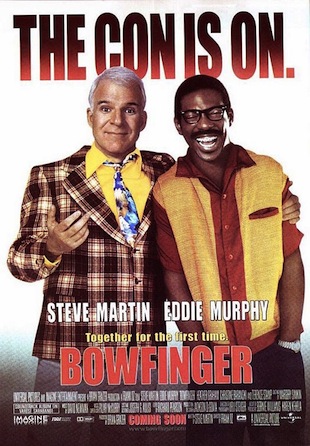 Independent film director Bobby Bowfinger is desperate to make a feature film. With a script penned by Bowfinger's accountant, titled "Chubby Rain", they're all set. However, having a budget of only $2,184, Bowfinger and his crew of one cameraman, two actors and one accountant-slash-screenwriter have to make do by sneaking equipment off studio lots, "borrowing" vintage cars from other film producers and filming in public places without a permit. Of course, the one thing that could make or break the film is the pull of a big star in the lead role, and they've found just the actor: Kit Ramsey. The only problem is that they kinda "forgot" to tell him about it first. Not really a problem: they just need to film him without him finding out, that's all.

Chubby Rain, the film within the film, contains the following tropes: