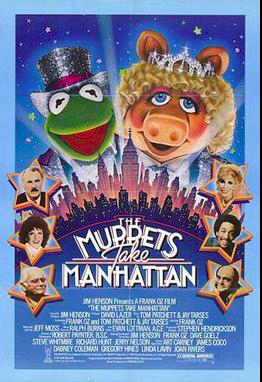 The Muppets Take Manhattan is the last of the original trilogy of Muppet feature films made by Jim Henson, released in 1984 and directed by Frank Oz.

Another take on the origins of the Muppets, this has them having all known each other during college and making a musical together (Manhattan Melodies); upon graduation, they decide to go to New York City and try to put the show on Broadway rather than just split apart. But after countless failures in trying to sell the show, they do split up, going to different parts of the country to make ends meet. Kermit gets a job at a diner and continues pursuing the dream of getting the show produced. Just as he succeeds and calls all the others back, he is hit by a car; now amnesiac, he winds up getting a job in the advertising industry. With the show one week away, the Muppets have to try and find him or, failing that, press on without him.

One of the musical numbers, featuring baby versions of some of the characters, turned out to be the debut of the Muppet Babies; their subsequent Saturday Morning Cartoon kicked off the Spinoff Babies craze.

Followed by The Muppet Christmas Carol.