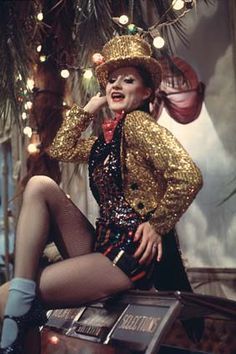 Some of your female characters can be varying levels of quirky. Beyond using erratic behaviour and strange, sometimes childlike, interests, the best way to show this is the outfits that she wears.

One of the most popular variations is to subvert gender expectations in dressing her in a full tuxedo, but then to re-emphasise her femininity in some way. Maybe it's the colour or the cut or the trimmings. It could also be replacing dress pants with a skirt (for the innocent), or with fishnets (for the daring).

Unless it's being lampshaded, this is Always Female. The outfit demonstrates the girl's uniqueness and individuality.

The girl is likely to be young, but not necessarily. Because of what it demonstrates of her personality, she need only wear a tuxedo at formal events, rather than more regularly, as she is dressing up but not conforming to the expected dress.

Four females are seen wearing tuxedos: Luz, Eda, Skara, and that girl in the Plant Coven.

Four females are seen wearing tuxedos: Luz, Eda, Skara, and that girl in the Plant Coven.