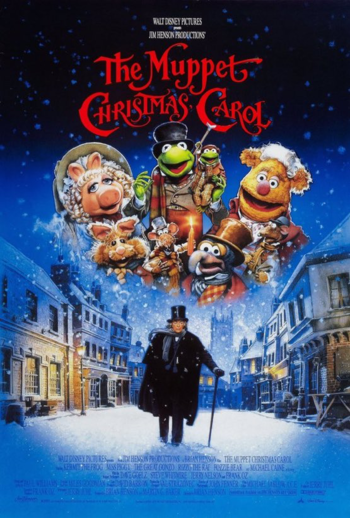 Charles Dickens's A Christmas Carol as performed by The Muppets. Directed by Brian Henson in his directorial debut, it is the first feature length Muppet production since the deaths of original Muppet performers Jim Henson (Kermit, Rowlf, Waldorf, etc.) and Richard Hunt (Scooter, Beaker, Statler, etc.). Released in 1992, it's the first of several Muppet films that adapts a famous story with the Muppets acting both as themselves and as characters from them, as well as the first one to be produced by Walt Disney Pictures. It stars Michael Caine as Scrooge. Oh, it's also a musical.

The film largely follows the story of the book with the typical Muppet humor thrown in. The film was praised for using specially created Muppets to portray the ghosts instead of established Muppets, in order to keep true to Dickens's descriptions. Remarkably, it's actually one of the most faithful Christmas Carol adaptations, with most of the dialogue intact and the omniscient narration quoted in large chunks by the character of Dickens himself — it's just that it's spoken by Muppets.

The film is also the first time Gonzo the Great and Rizzo the Rat appeared as a double act. Gonzo plays Charles Dickens and acts as the narrator, while Rizzo is, well... Rizzo.

The film was followed up with Muppet Treasure Island in 1996, which also had humans playing vital roles while the Muppets played supporting characters. In a holiday context, this was followed by NBC's It's a Very Merry Muppet Christmas Movie (effectively Muppet It's A Wonderful Life) in 2002, Kermit's narration of 1995's Mr. Willowby's Christmas Tree notwithstanding.

A newly restored extended cut of the film with the deleted song “When Love is Gone” is set to stream on Disney+ starting during the holiday season of 2022.

Rizzo: Wow, what a great story, Mr. Dickens!
Gonzo: Oh, thanks. You think that's good, you should read the book.

When Love is Gone & Found

The Muppet Christmas Carol ends with Scrooge reprising a song of love lost, but now using to celebrate the love found.

When Love is Gone

When Love is Gone & Found

The Muppet Christmas Carol ends with Scrooge reprising a song of love lost, but now using to celebrate the love found.

When Love is Gone