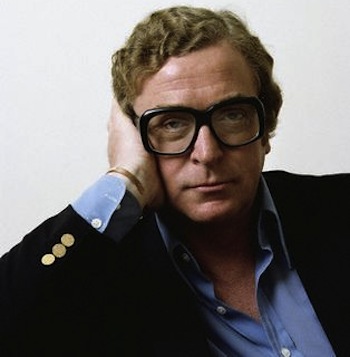 He keeps on going and he doesn't blink. Even when wearing enormous glasses.
"My career is going better now than when I was younger. It used to be that I'd get the girl but not the part. Now I get the part but not the girl!"
— Michael Caine
Advertisement:

Sir Maurice Joseph Micklewhite Jrnote He chose to be knighted under his birth name, in honour of his father CBE (born 14 March 1933) is a British actor better known to the world as Michael Caine, with over a hundred films ranging from Zulu to the pictures of Christopher Nolan.

Willing to do parts for the money, or for art. He's an elder statesman of acting, being nominated for an Academy Award every decade from the 1960s to the 2000s, sharing the honor only with Jack Nicholson. He won twice for Best Supporting Actor for Hannah and Her Sisters (1986) and The Cider House Rules (1999), and has been nominated for leading roles several times over. Often the source of imitation by many comedians because of his distinct Cockney accent.

In 2021, Caine suggested he might not make any more films, citing his advancing age and various health issues, plus an interest in moving into fictional book authorship having completed his first novel, If You Don't Want To Die during the Coronavirus lockdown.

Tropes related to this actor: