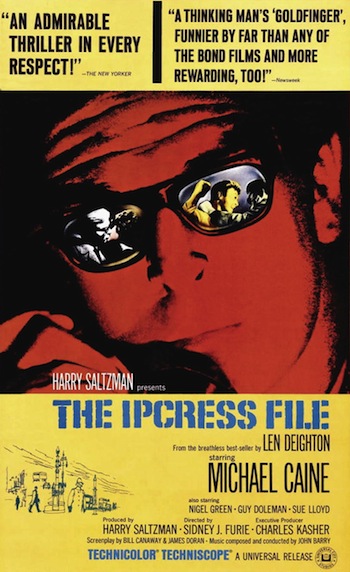 The Ipcress File is a 1965 British film, adapted from the Len Deighton novel, and starring Michael Caine as spy Harry Palmer.

It was directed by Sidney J. Furie and produced by Harry Saltzman, co-producer of the James Bond film series, who brought a lot of his Bond Production Posse over to the film, including designer Ken Adam, composer John Barry and editor Peter Hunt. Despite these links, The Ipcress File was a very different beast to the Bond films. Characters were less concerned with fighting villains in volcanoes than they were in ensuring that the correct paperwork was filled out. Its main hero was a bespectacled working-class former black marketeer who bought his groceries in supermarkets.

The Ipcress File proved an enormous success. The character of Harry Palmer was revived for two sequels based on Deighton novels, Funeral in Berlin and Billion Dollar Brain, as well as two further sequels not based on any of the novels, Bullet to Beijing and Midnight in St. Petersburg.