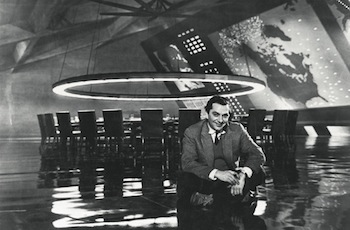 Ken Adam on one of his most famous sets.
Advertisement:

A German Jew born in Berlin, Adam left Germany at age 12 during the rise of Nazism (he was an eyewitness of the Reichstag fire on February 27, 1933). He arrived in England where he studied architecture and served in the Royal Air Force during World War II — one of only three German-born people to do so along with his younger brother Denis. In 1947, Adam entered the British film industry as an assistant art director on such period pictures as Captain Horatio Hornblower (1950) and Helen of Troy (1956). He was a full art director for the European-filmed sequences of Mike Todd's Around the World in 80 Days (1956) and became a production designer in 1960. He worked on The Trials Of Oscar Wilde produced by Albert R. "Cubby" Broccoli. Two years later, Broccoli hired him to work on the first James Bond film, Dr. No (1962). Inspired by both German Expressionism and the modernist architecture of Frank Lloyd Wright, Adam succeeding in giving a multimillion-dollar veneer to what was a very economical production - in fact, they recognised the value of his work so much the producers gave him an additional £6000 out of their own pockets to build his designs. His imaginative work in that film caught the attention of director Stanley Kubrick, who enlisted him for his production of his nuclear war comedy Dr. Strangelove (Or How I Stopped Worrying And Love The Bomb (1964). His "War Room" remains one of the most memorable sets ever seen on film. In addition to the War Room, his team also managed to guesstimate the exact interior of the B-52 bomber (access to the interior was classified at the time), to the point that Kubrick actually worried if Adam's team had carried out its research legally. (They, in turn, claimed they just logically extrapolated from WW2 bombers.) In Goldfinger (1964), the story's climax takes place inside the U.S. gold depository at Fort Knox. Adam was denied access to the Fort's actual interior, and had to conjure up the contours of the vault from his own imagination. His version of Fort Knox was a "Cathedral of Gold" with stacks and stacks of gold bars. Adam remained with the Bond series until the 1970s, his budget (and his creativity) expanding with each successive feature. His last Bond film would be Moonraker, providing the memorable underground launch site and space station sets.

In 1975, Adam won an Academy Award for his re-creation of 18th century England in Kubrick's Barry Lyndon, and in 1981 he was given "visual consultant" credit for designing a vast Edward Hopper-style cityscape in Herbert Ross' Pennies from Heaven. Among Ken Adams' other most notable achievements has been his brilliant literalization of the creepy cartoon world of Charles Addams in 1993's Addams Family Values. Ken Adam received his second Oscar in 1994 for The Madness of King George.