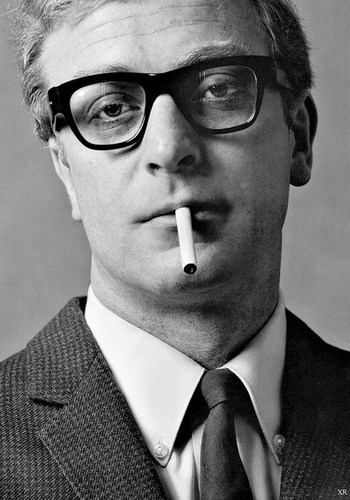 Michael Caine played British secret agent Harry Palmer in five films, based on a series of novels by Len Deighton.

The first three — The Ipcress File, Funeral in Berlin, and Billion Dollar Brain — were released in the 1960s, during the height of the Sean Connery James Bond films, and offer a grimmer alternative to the increasingly flashy espionage of Bond. Perhaps the most interesting aspect of this is that they were actually produced by Bond producer Harry Saltzman, who recruited much of the Bond films' Production Posse to essentially make his own "realistic" spy series in-house. Caine returned to the role thirty years later for two more films, Bullet to Beijing and Midnight in Saint Petersburg.

There are more related novels, Horse Under Water and An Expensive Place To Die starring the "Palmer" character, and Twinkle, Twinkle, Little Spy and Spy Story featuring a different (but also unnamed) spy and some recurring characters. The former two were never adapted (Horse Under Water would have been next if Billion Dollar Brain had performed better), but the last was adapted separately with the character under the name "Pat Armstrong", his alias in that novel.

Harry Palmer had a bigger influence on Caine's career than you might think. In the film Blue Ice, Caine played a retired spy named Harry as a Mythology Gag to the role, and wore the iconic NHS frames again as spies Nigel Powers and Chester King/"Arthur".

Films in this series with their own trope pages include:

The films in this series provide examples of: