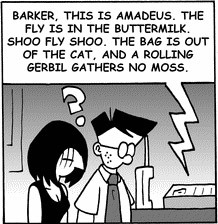 Speaking in code. Not only spies, but anyone in a secret-ish organization having a reason to be discreet — like La Résistance with code phrases, a Man In Black using metaphor, a hit squad, etc. — might do this. A form of Cryptic Conversation.

Usually one of these three:

Despite (or perhaps because of) the randomness of these kinds of spy speak, a completely unrelated civilian will get embroiled in whatever the plot is by randomly getting the code words, Sign Countersign, or metaphor right. Alternatively, a character might point out that they're doing this under unnecessary circumstances, and the codeword usage is just pointless. Another typical parody/subversion is to have the apparent Spy Speak turn out to be literally true, generating confusion. Might rely heavily on birds and flying.

Subtrope to Double Meaning. See also The Password Is Always "Swordfish", Attack Pattern Alpha, Military Alphabet, Talking Through Technique and Reporting Names. Can overlap with Public Secret Message. May result in Mistaken for Badass. Codename Title is when this shows up in the name of the work.

Then a third man breaks in with "The circus elephant has lost its way," which puzzles the first two men right up to the point where they see the actual circus elephant.

No surprise that David Mamet co-wrote the screenplay.

This is repeated over thousands of miles of such walls, each with different codes.

The agent then remarks that it actually is supposed to rain later, complimenting whoever it was that came up with that code.

Eliot and Margo have a conversation with pop culture references so the Fairy Queen who's listening in won't know what they're talking about. It has so many references that it needs subtitles for the viewer to follow.

Eliot and Margo have a conversation with pop culture references so the Fairy Queen who's listening in won't know what they're talking about. It has so many references that it needs subtitles for the viewer to follow.