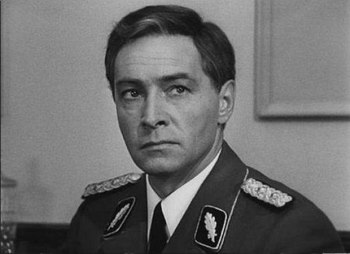 Stirlitz opened his computer, connected to the internet, and logged onto TV Tropes. "It's a website," concluded Stirlitz.

(Russian: Семнадцать мгновений весны, Semnadtsat' mgnovenij vesny), also Seventeen Instants of Spring, is a 1973 Soviet TV miniseries directed by Tatyana Lioznova and based on the book of the same name by the novelist Yulian Semyonov. The series consists of 12 episodes of 70 minutes each.

The series depicts the life of a Soviet spy Maxim Isaev, who is operating in Nazi Germany under the name Max Otto von Stirlitz (sometimes transcribed as "Stierlitz"), played by the Soviet actor Vyacheslav Tikhonov. Other leading roles were played by Leonid Bronevoy, Oleg Tabakov, Yuri Vizbor, Yevgeniy Yevstigneyev, Rostislav Plyatt, Vasily Lanovoy and Mikhail Zharkovsky. The series is set in 1945, with the war lurching to a conclusion. Isaev/Stirlitz has been a Nazi Party member since 1933 and has risen to a high rank as an SS intelligence officer, while all the time spying for Moscow. He receives a coded message saying that Soviet intelligence has heard rumors that someone in Germany has approached the Western Allies with hopes of making a separate peace. Moscow directs Stirlitz to find out who is doing it. Meanwhile, SS intelligence chief Ernst Kaltenbrunner has grown suspicious of Stirlitz, and orders Gestapo boss Heinrich Muller to investigate him.

This series had openly disobeyed the Soviet cinema rule of depicting the Nazis as Complete Monsters. Walther Schellenberg, Müller and Bormann were performed by the popular and charismatic actors Oleg Tabakov, Leonid Bronevoy and Yuri Visbor (who managed to lend a touch of charm to their roles while leaving the audience with no illusions as to the morality of their characters), and Nazi bosses in general were shown as being very much alike the Soviet bosses of the time. And the protagonist, Stirlitz, looked like a Soviet intellectual who had to hide his true self under the mask of obedience, loyalty and "proper ideological orientation". Stirlitz's awesome ability to outwit his bosses and keep "the human face" at the same time (despite the fact that one could hardly make a career in SS from 1939 till 1945 without staining his hands) was praised by the Soviet audience, who felt as though they were being spied on in their own country.

Due to this, the series became a Fountain of Memes and the source of many anecdotes and jokes—see Russian Humor for examples of these, as well as the page quote. The series has been hit with Parody Displacement in Russia today, as far more people are familiar with the jokes than the original TV show. It is sometimes described in the West as "Russian James Bond", which is true only in the sense that Stirlitz is seen as the quintessential super-spy in Russia in much the same way Bond is in the West - otherwise, the austere Stirlitz has very little in common with the rather more flamboyant Bond* James Bond.

There is are other films and series based on Stirlitz novels, such as a prequel series set in the Red October era.

Stirlitz had a trope. He liked it, so he had another one: