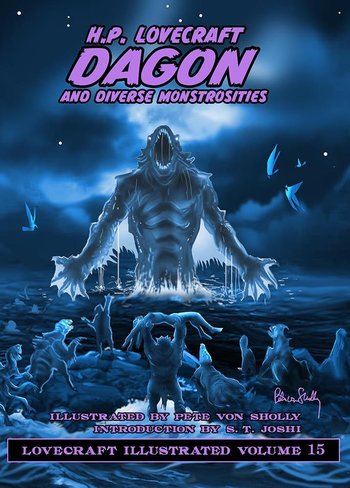 It is presented as a Suicide Note written by an unnamed man who describes an incident that he experienced during World War I, when he was a sailor aboard a cargo ship. He and his crew were captured by a German sea-raider but treated with respect despite being prisoners of war. In fact, so good was their treatment, that the narrator was able to easily escape in the middle of the night in a lifeboat with enough supplies to last until he was either rescued by a passing ship or reached land.

However, much to the narrator's shock, his boat turns up on the shore of an island, which he discovers to be a piece of the ocean floor brought to the surface by volcanic upheaval. Once the ground is sufficiently dry, he begins to explore this land, and on the other side discovers a strange obelisk which arouses his curiosity. However, that curiosity soon turns into outright horror when he glimpses a gigantic sea monster.

The story is known for being among the earliest to explore some of the ideas Lovecraft would become known for — mankind's inevitable doom in an uncaring cosmos.

Do not confuse this with the film named Dagon (which is actually an adaptation of a different Lovecraft story, "The Shadow Over Innsmouth").