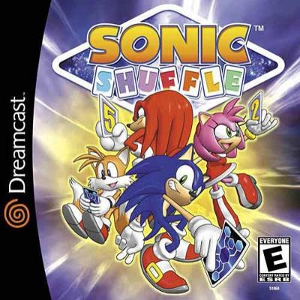 The One with... Mario Party.

Sonic Shuffle is a Sonic the Hedgehog-themed Party Game for the Sega Dreamcast that was released in November 2000. The game was done by Hudson Soft, the same company who Nintendo trusted with the Mario Party series as well as the creators of popular multiplayer games like Bomberman.

Sonic, Tails, Knuckles, and Amy are asleep one night when they all receive mysterious summons from Lumina Flowlight, a fairy. Sonic assumes that they are dreaming, and they are; as Lumina explains, she brought them here to save Maginaryworld.

The world of dreams is threatened by the existence of Void, an evil, lonely being who shattered the Precioustone that grants people's dreams. This action also imprisoned Illumina, the Goddess of Dreams, rendering her unable to fix things. After agreeing to help her out, Sonic and his friends set off to recover the pieces of the Precioustone and save everyone's dreams.

That, and play mini-games.