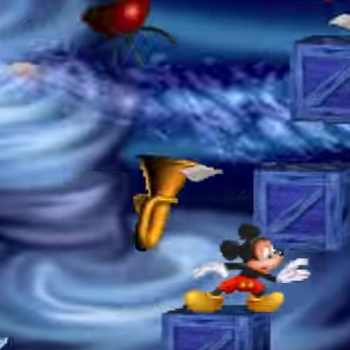 In a video game, it's not uncommon to have levels high up in the air, but how do we spice it up? By having it take place in a tornado, of course! Who cares if tornadoes are probably one of the most dangerous and common natural disasters? It's cool, it's surprising, and that's all that matters! Usually, you are told to not get near a tornado, but here, you just jump right into a whirling adventure!

In reality, being able to survive a tornado, let alone the violent, strong winds that surround it from a mile radius would barely be possible, but not in this case. You simply have to find a way out of the whirlwind and you'll barely have a scratch done on you. Usually these types of levels have strong winds, almost everything flying around and at you, or said debris being your main ways of navigating the twister to remind you that you're in a tornado.

Compare Do Not Touch the Funnel Cloud and Gusty Glade.