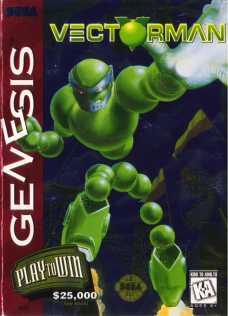 Well, it looks like the environmentalists were right. In the year 2049, Earth has become inhospitable to human life, thanks to all the littering and pollution, forcing humanity to escape to space in order to find new homes to inhabit. They leave mechanical "Orbots" behind on Earth, tasking them with cleaning up the planet for their return.

Raster, a high-level Orbot who watches the cleanup through a planetwide computer network, is accidentally attached to a working nuclear bomb by a lesser Orbot and subsequently goes insane, becoming an evil dictator named Warhead. He declares himself ruler of Earth, brainwashes all of the other Orbots, and begins preparing to execute any humans who dare return to Earth... not so fast!

Enter Vectorman, a humble Orbot in charge of cleaning up toxic sludge by discharging it into the sun, and since he was off-planet at the time of Warhead's takeover, he was not affected by his brainwashing. As he lands on Earth after his last trip, he finds chaos and confusion. Being the only Orbot left capable of challenging Warhead's rule, Vectorman takes it upon himself to destroy Warhead and restore peace to the Earth, destroying as many of Warhead's followers as he can.

In the sequel, Vectorman 2, having successfully defeated Warhead and put an end to his tyranny, Vectorman immediately resumes his sludge-cleaning duties. While on a routine garbage run, his barge is shot down by a mysterious missile. Evacuating the barge and descending down to the surface, he finds himself on the outskirts of a seemingly abandoned research facility overrun by a horde of mutant insects with unpleasant designs on the planet. Vectorman must find the intelligence controlling them and kill it to save the Earth yet again.

These games were released in 1995 and 1996 for Sega Genesis, and were very well received by critics and players alike, not only for their then-amazing faux-3D graphics and cool techno soundtracks, but for being highly enjoyable games that weren't too hard to play. Part of the game's appeal was the entire design of the "Orbots" themselves - characters made out of several individual sprites (which, as the name indicates, were mostly spherical in nature) that could be rearranged in a variety of different ways. The gameplay played this up, allowing Vectorman to transform into a variety of different forms, arranging his orb sprites so that he resembled things like scorpions or tanks instead of a humanoid, each form having their own gameplay quirks (or even entire stages dedicated to them).

A third game for the PlayStation 2 was planned, but was ultimately cancelled. Since then, Vectorman's only appearances have been in various Genesis/Mega Drive compilations and—of all places—as an unlockable character in a mobile port of The House of the Dead: OVERKILL.