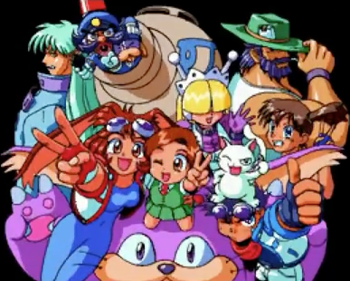 A Fighting Game created in 1996 by Sunsoft for Neo Geo, Sega Saturn and re-released for the PlayStation 2 as part of the Sunsoft Collection in 2008, it's their second venture in the genre after Galaxy Fight (and would be followed in 1998 with Astra Superstars). The story is about the seven magical WakuWaku Balls, artifacts that will grant a wish to their owner: soon enough, whoever is possessing one of them is looking for the other owners and their Ball, hoping to get their wish granted by a fairy that lives in the spheres.

Waku Waku 7 has very colorful, cheery, anime-inspired graphics, and indeed every single character in the game is either an Affectionate Parody of some anime cliches or an Expy of already famous characters, even non-anime ones. Here's the list:

In addition, there are also two bosses to fight against who are unplayable outside of console ports: