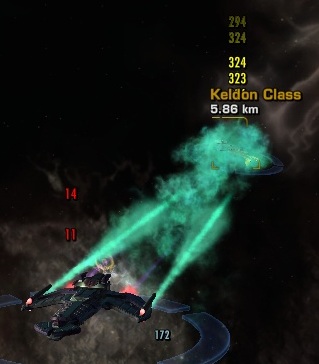 Qapla'! Let's see how that worthless petaQ enjoys some super-heated warp core plasma!
"A reaction drive's efficiency as a weapon is in direct proportion to its efficiency as a drive."
— The Kzinti Lesson, Larry Niven
Advertisement:

Most jetpacks, rocket boots, and spaceships give off impressive plumes of fiery exhaust when they're moving. For the most part, this exhaust is just there to show that something's happening. But the exhaust of a rocket can also double as a short-ranged weapon, especially during a getaway. Characters with jet boots can perform really effective Goomba Stomps, while starship pilots can cause enormous damage with their drive flames.

Also known as the Kzinti Lesson: the more efficient a reaction drive is, the better a weapon it makes. An inversion of the Law of Inverse Recoil, since the recoil in these cases is intentional. Also an inversion of Recoil Boost, which is an exhaustized weapon. A subtrope of Superweapon Surprise. Fartillery is effectively the biological variant of this. See also Backpack Cannon. For another way you can weaponize your engines, see Ramming Always Works. If the opposite end of the engine is at issue, see Turbine Blender.

Contrast Banana in the Tailpipe.

There's more than one way to get rid of raiders.

There's more than one way to get rid of raiders.