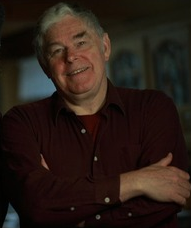 James P. Hogan (27 June 1941 – 12 July 2010) was a British science-fiction writer. His first book, Inherit the Stars, was written on a bet: he complained about the ending of 2001: A Space Odyssey so often that his coworkers told him to write something better, and bet him he couldn't get it published.
Advertisement:

His works (especially his early works) tend toward relatively hard science, with minor expansions to scientific laws. Notably, his first book is entirely about scientific research. However, his later works tended to overshadow this with Filibuster Freefall - the original Trope Namer, "The Brain Eater", was a term used by James Nicoll to refer to the problems with later works by Hogan, among others.

Manga comics based on some of his works were made: