Literature / The Rise And Fall Of The Third Reich 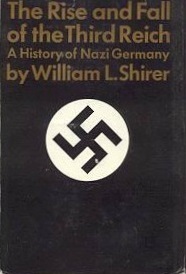 The big book on Nazi Germany.

The Rise and Fall of the Third Reich: A History of Nazi Germany is a history book on Nazi Germany by journalist William L. Shirer, published in 1960.

Shirer lived in Nazi Germany for a few years before wisely getting the hell out of dodge when things started getting nasty for him, but what he saw (and sometimes was forced to participate in) colored his views on Germany before, during, and after Hitler's rule. After the end of World War II resulted in a flood of secret German documents becoming accessible to the public, and with his memories of his own time in Germany still fresh in his mind, Shirer dedicated a huge amount of time to writing about the Third Reich.

This book is the result of years of extensive research, and yet despite this, Shirer himself bluntly states early on that he is a journalist, not a historian, and thus everything he says must not be seen as absolute fact. He also warns that his personal biases may color his perception of the facts. A number of the book's claims have, as Shirer predicted, been debunked over the years, and historians as a whole are not particularly impressed with it. However, even they tend to find it a pleasant read, and many have argued that it is a good place to get general information on Nazi Germany for those who are interested.