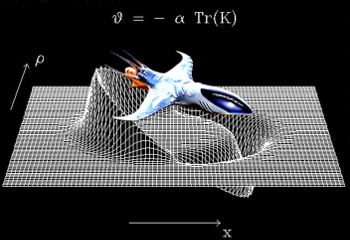 What an Alcubierre drive does to the fabric of spacetime.
"Imagine that! It never occurred to me to think of space as the thing that was moving."
— Lt. Cdr. Montgomery Scott, Star Trek (2009)
Advertisement:

Faster-Than-Light Travel has long been a staple of science fiction since it allows you to travel to other solar systems and back inside of a human lifetime. But in real life, of course, we run into the unfortunate fact that according to basic Einsteinian physics particles with mass can never reach the speed of light, never mind going over it.

In 1994, however, Mexican theoretical physicist Miguel Alcubierre (pronounced "al-koo-BYAIR-ray") came up with a solution that is mathematically possible, albeit still out of reach of current technology, after being asked to find a way to "warp space" a la Star Trek. There's no law against space itself going faster than c, so instead of trying to accelerate the object past the speed of light, you move space itself around the object. The ship creates a bubble of spacetime of sorts, compressing space ahead of it and expanding behind it. Since the ship is not moving faster than light relative to the bubble, relativity is not violated. And there is no possible viewpoint from which you can see both the inside and outside the bubble, and find out it moves FTL. The inside of the bubble becomes undetectable to the rest of the universe when the light barrier is broken, and vice-versa, you cannot peek from inside the bubble. This makes the warp bubble behave very similarly to various fictional "hyperspace" drives: the ship vanishes and hurtles on hidden in a pocket subspace, completely straight...and completely uncontrollable.

The interior of the bubble becomes causally disconnected from the rest of the Universe including the bubble itself. How to stop an Alcubierre bubble once it arrives at the destination is a complete enigma to modern science, but a sci-fi writer who wants to use the drive can posit a conjecture that the bubble bursts open when it hits a gravity well, since nothing forbids objects from outside from affecting the bubble. Therefore, the navigation is simple and very Star Wars-esque: point it straight to the target, engage warp jump and faff around until the ship arrives at the target star's gravity well, the bubble bursts and you return to normal space. If you miss, however...warping for ten years and arriving at the other end of the galaxy is the mildest possible consequence. The bubble can absorb interstellar hydrogen, which potentially can cause the bubble to become unstable if it absorbs too much when you warp for too long, and when it pops, all absorbed mass is released as energetic radiation according to E=mc squared. Even if you survive this blast, you are stranded in the middle of nowhere...and God help you if you collide with some small object while en route.

Fiction authors, of course, don't have to face the problem of actually building a practical Alcubierre drive, and since it was proposed it has become popular in harder sci-fi as a method of achieving Faster-Than-Light Travel without violating physics as they are currently understood.

A form of Reactionless Drive and usually a subtrope of Faster-Than-Light Travel.

Fictional uses of the Alcubierre drive: