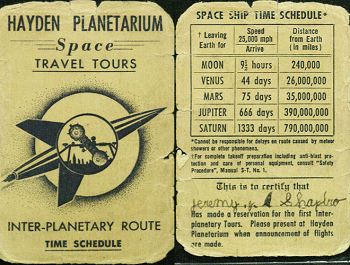 Wait a minute. How many days to Jupiter?
Eternal Father, King of birth, who didst create the heaven and earth!
And bid the planets and the sun, their own appointed orbits run!
O hear us when we seek thy grace, for those who soar through outer space.
— J.E. Volonte
Advertisement:

Currently it takes about 20 million dollars of government support to get a single human being into Low Earth Orbit, and only robots have gone beyond the moon. Aside from the massive cost there are supply considerations because getting just about anywhere takes months if not years. However, in many stories involving space (and nearly all outside of literature), even if interstellar travel is hard, interplanetary travel is easy, taking a couple days at most and within the range of at least an upper-middle class person cost wise.

In context, it's not that bad; historically, Christopher Columbus' first voyage cost less than two million

- and once you reach orbit, you're halfway to anywhere

. Once the infrastructure was in place, the original American immigrants made their journeys on personal funds - so there's no reason that the phenomenon shouldn't repeat itself by the 2050's so long as we get a "space Mayflower" by the 2020's. Better get to work on that.

Sister Trope of Casual Interstellar Travel. Sometimes there's minimum range limitation that makes only interstellar transit easy (say, wormholes), sometimes interstellar travel is still sublight or very difficult, but this is easy. May be justified with In-System FTL. At the other end of the spectrum, see Interplanetary Voyage (where interplanetary travel is treated as so difficult that it takes up the whole story) and Generation Ships.