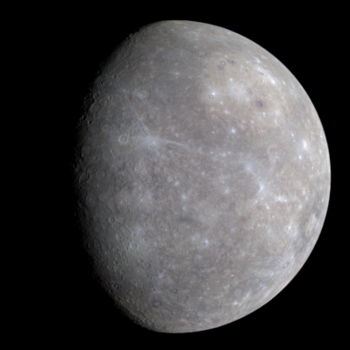 It's a dry heat.
"I had rather be Mercury, the smallest among seven [planets], revolving round the Sun, than the first among five [moons] revolving round Saturn."
— Johann Wolfgang von Goethe (1749-1832)
Profile
Advertisement:

The smallest of the planets (smaller even than the moons Ganymede and Titan in the outer solar system by volume, although not by mass, as it outweighs the two of them combined), and the closest to the Sun. The planet is mostly made of rock and metal, with a larger proportion of metal than the other inner planets, and as a result is the second densest of the large moons and planets. (Earth is more dense only because the large size compresses materials more, and a current theory about the Moon's creation indicates the Earth has a larger core thanks to the collision with theoretical planet Theia.) A number of theories exist for the extra concentration of metal: the heat near the early Sun may not have allowed as many silicates to condense, the Sun may have blown off the other rocks early on, or an impact may have blown off most of the outer rocks.

It is named after the swift Roman messenger god because it moves the fastest across the sky of all the planets. The surface gravity on Mercury is 0.38 g, which is 38% of Earth's gravity. Interestingly, it shares roughly the same surface gravity as Mars despite being smaller than it because it's more dense.

The planet is geologically inactive today, mostly covered in craters, although some smoother plains presumably covered by lava, a few remains of possible volcanoes, and faults are found on the surface. Despite the inactivity, the planet has a magnetic field, although one much weaker than Earth's. Some activity may be due to the contraction of the planet over time. Evidence that Mercury shrunk lies in the presence of tall and long cliffs spread relatively evenly over its surface. These cliffs are called scarps, and are widely held to be the result of subduction zones. If Mercury were tectonically active, the presence of subduction zones on one side of the planet should be an indicator of rift zones on the other side. Instead, astronomers found more scarps, consistent with the hypothesis that the crust contracted planet-wide.

Mercury is very difficult to study from Earth, as it does not stray too far away of the Sun so it's almost always seen low in the sky thus suffering the effects of atmospheric turbulence appearing as little more than a featureless blob with a telescope, even if with lots of patience and observing it with large telescopes during daylight knowing where to look was possible to create very rough maps of its surface

◊note "Solitudo" is latin for "desert". In fact, it was expected that the planet would be tidally locked to the Sun, with one side always facing the Sun and the other always facing away, but the planet actually rotates in a 2:3 ratio with its orbital time. The ratio means that at times the Sun appears to move backwards in the Mercurian sky, and the orbit itself is unusually eccentric, which produces two equatorial "hot" poles (which always face the Sun at perihelion) and two "cold" poles (which never do). The orbit itself also precesses at a higher-than-expected rate; this was an unexplained mystery that was finally solved by general relativity. Because of this longstanding belief, most depictions of Mercury can be summed up as pre-1965 (Mercury as a tidally locked planet with permanent "hot" and "cold" sides) and post-1965.

Mercury is a planet of massive extremes: the side facing the Sun is incredibly hot, but the side facing away from the Sun is incredibly cold, up to -200 degrees. In fact, the only hot parts of Mercury are the parts directly in the path of the Sun's radiation. Since the planet's wisp of an atmosphere can't hold or convect any significant amount of heat, anything in shadow is very cold. How cold? There's ice in the nooks and crannies of the planet where the Sun doesn't shine. It's still not livable by any means, but it makes the planet far more interesting to astronomers.

One particularly unique set of features on Mercury is the Caloris Basin, its largest impact crater, and the hilly Weird Terrain (that is the official name) found on the opposite side of the planet from it. The leading hypothesis is that the impact that created the Caloris Basin was so strong that it sent ripples through the entire planet, creating the Weird Terrain when the energy had nowhere else to go.

Only two probes have made it to Mercury so far, both from NASA (Mariner 10 in 1974, and MESSENGER in 2008) — despite being close to Earth compared to the outer planets, it takes a lot of energy to cancel our home's orbital momentum and "fall in" towards the Sun.note The same reason that Hurl It into the Sun is generally unrealistic. As a side note, features on Mercury are generally named after intellectuals — artist, painters, writers, and so forth. A third probe, the ESA and JAXA's BepiColombo, is on the way there right now.

Mercury's future is a bleak one, as most projections have it flinging itself outwards

away from the Sun, with a strong possibility Earth will be in its cross-sightsnote The probabilities of Mercury going haywire are actually around 1%

, and even if that was going to happen that updated research suggests it would most likely crash into the Sun or Venus, so it seems much more likely the Sun will try how tastes Mercury once it goes red giant more than seven billion years from now..

Mercury being the innermost planet of course lacks the equivalent of an evening/morning star and lacking a natural satellite has no friendly moon shining on its skies. However this is compensated by having the best possible view of Venus, that appears as a dazzlingly bright white star considerably brighter than from Earth as from there is seen as a full disk and not as a crescent. With an apparent magnitude of -7.7, it is the brightest planet of any seen from the surface of another in the Solar System and would be able to cast shadows. Earth, meanwhile, would appear as a bright blue star, brighter than our view of Venus (-5 vs. -4.4) and thus the second-brightest object in the night sky. The Moon is far enough away from the Earth from Mercury's perspective that it would appear as a distinct (albeit nearby) object, brighter than Sirius at its closest approach to Mercury. Given its greater distance from them, all other planets would appear dimmer than they do from Earth.