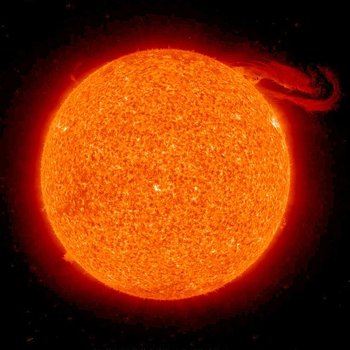 The Sun is a big, glowing, hot (approx. 5750 K. on the surface on average) globe of plasma composed mostly of burning hydrogen and helium. Yeah, just like every star you see. Altogether, it's nothing special, just a common G-class star, white (not yellow, though atmospheric scattering of blue light may make it seem so) and rather smallnote To be precise, it's unimpressive compared to the stars visible in the sky which are mostly giants and supergiants. But most of the stars that actually exist are hard-to-see red dwarfs, and old Sol clearly outshines most of those., on the outer third of the Galaxy on the Orion arm or in the uncharted backwaters of the unfashionable end of the western spiral arm. It's just a little bit (on the cosmological time scale) older than Earth itself. It is currently around 5 billion years old, and it has enough fuel for another 5 billion. At the end of its life cycle, it will inflate to a red giantnote Important nitpick: a red giant is not at all the same thing as a nova. A nova requires a white dwarf star siphoning material off another star it orbits, and only lasts for a few weeks or months; singular stars like the Sun will not, and cannot, "go nova". Oh, and don't confuse either of these phenomena with a supernova, which is another beast entirely. The Sun has nowhere near enough mass to ever reach the supernova stage. And don’t even get me started on hypernovae or gamma ray bursts. The closest star to us that could do one of those is Eta Carinae, or any other wolf-rayet star., consuming Mercury, Venus, and probably Earth. The Red Planet gets off with a sunburn, and Titan might thaw out and develop its own life... at least until the sun collapses into an Earth-sized white dwarf and slowly cools to the ambient temperature of the universe over the next trillions of years. There is a significant possibility that the Sun will be ejected into intergalactic space in 4 billion years when the Milky Way and Andromeda galaxies collidenote Given the vast amount of empty space in a galaxy, the odds of stars or planets actually coming into contact during this event are extremely low. and merge, but this is unlikely to have any physical effect on the Sun or its planets.

Still, for us humans it holds a very huge significance, and thus it's featured quite frequently in fiction as it is the closest star to us. In fact, the Insignificant Little Blue Planet called Earth is orbiting around it. Yeah, we're orbiting in a roughly circular shape with a radius of 8.3 light minutes and the Sun in the center. And yes, you see it every (cloudless) day (unless you are living on a latitude greater than 66.7° North or South), so unless you are literally living under a rock and never leave, you must be kind of familiar with it.

As were people in the ancient times. The Sun has been revered as a deity, or as an object of divine origins by many religions. Apollo was the Greek god of the Sun, existing alongside a counterpart in the form of the Titan Helios. The ancient Egyptians saw it originally as the Pharaoh's soul; later it was associated with Ra and Horus. The Babylon the Sun was the justice god Shamash; in an attempt to prevent idolatry the Sun is not named in the Genesis creation narrative. And this is only a very small part of the great number of solar deities

found in cultures. In such cultures, the Sun is often contrasted with The Moon. The very English word for "Sun" comes from Sunne, an Anglo-Saxon goddess, and and she also is ultimately the source for Sunday (Sunnedaeg). However, all of those beliefs were 100% correct in the belief that the Sun was the source of all life.

The surface gravity on the Sun is a whopping 28.02 g, which is 28x stronger than Earth's gravity. Assuming you somehow survive the extreme heat and radiation, you would literally be crushed by your own weight.

Despite being made of ionized gas, the tremendous pressure in its interior squeezes the core into a very dense ball, bringing the Sun's average density up above that of liquid water. As one astronomy professor said, if you put the Sun in a bucket of water it'll sink. The core is less than a quarter of the Sun's diameter, but it exists at over 100 billion times sea level pressure, up to 150 times the density of liquid water at its center note 13.2 times the density of lead, and a temperature of 15 million Kelvins (15 million° Celsius, 27 million Fahrenheit). The only thing keeping the Sun from collapsing in on itself still further is the nuclear fusion reaction going on in its core — so much heat is produced that the radiation literally lifts up the outer layers against their own weight. Nevertheless, when compared to even the largest planets in the solar system, the Sun is freakin' huge. It's over a hundred times bigger across than the Earth, and weighs over 300,000 times as much. In fact, all of the planets, asteroids, and comets in the solar system combined have only about one-tenth of 1% of the Sun's mass. If the Sun had a solid surface — which it doesn't — you'd experience 28 times Earth's surface gravity if you stood on it.

As said above, its core will run outta gas some 5 billion years from nownote In the meanwhile, its luminosity will increase slowly as its core contracts to continue fusing the each time more and more scarce hydrogen. That will mean serious trouble

for life on Earth in just around six hundred million years from now onwards. When this happens, the Sun will inflate a lotnote "But wait!" I hear you cry. "If the core is no longer providing any radiative pressure to support the sun's upper layers, why will it expand instead of shrinking under its own weight?" I'm glad you asked. When the core fizzles, the layer immediately above the core will collapse down upon it, and in the process this layer will get more and more compressed until it ignites in nuclear fusion itself, forming a hydrogen-burning shell. Note also that the Sun is limited to the available hydrogen on its core due to its internal structure (a core and an outer region, both convective, separated by a zone where energy is transported by radiative and thermal processes. Red dwarf stars, the smallest ones, are fully convective instead having access to all their hydrogen supply, which together with the miserly rate at which they fuse it means they'll last far more than our Daystar in One-Winged Angel fashion and consume at least some of the inner planets — likely including Earth, causing a Class 5 or Class X apocalypse. note Even if Earth survived, its fate would be to lose whatever water remains (see below) and atmosphere, becoming a planet covered by a magma ocean under the intense light of the huge red giant Sun. This inflation will take a short time in astronomical terms and will be very gradual by human-lifetime standards: computer models of evolution of Sun-like stars suggest the sun will need more than 2 billion years to grow from its end-of-main-sequence normal size to its full red-giant glory.note Delta Pavonis, a star extremely similar and very close — about 20 ly — to the Sun is currently going through this phase. It started the process during the time that modern humans have existed — possibly even during recorded history — but only our descendants to the umpteenth generation will get to see the transformation in full. Astronomers have a mild interest in this star, since being the Sun's "near-identical older brother" — as we put it — its evolution will give hints about what's to come for old Sol. After a couple of million of years in this red giant phase, it will shrink again in just a few thousand years as its core begins fusing helium into carbon and oxygennote Helium ignition is a very violent process

, liberating energies comparable to that of a supernova. However, all of that energy is used to re-expand the core and nothing unusual is visible from the outside. The Sun will be then a red clump star

, roughly fifty times as luminous as is now and eleven times larger, re-expand again in Clipped-Wing Angel fashion as a red giantnote As an Asymptotic giant branch

, to be more exact when it runs out of helium at its core 100 million years later, and then finally shed its outer layers in a breathtaking display known as a "planetary nebula". note So named because such nebulae appear as an extensive disc in a telescope, and can be confused for a planet by an observer who doesn't know any better. What will remain afterward is the tiny, exposed core of the Sun, now shrunk to a super-densenote one teaspoon of white dwarf matter would weigh several tons at the surface of the Earth white dwarf the size of the Earth, slowly cooling to a black dwarf over the next quadrillion years (more than 70 times the current age of the universe). More than a few astronomers and physicists have pointed out that at least by this point, the Sun will be harboring one big-ass diamond

But we might not have that long to wait before things get ugly. According to current models of stellar evolution, in a paltry one billion years the Sun will brighten enough that Earth's oceans will evaporate. We likely won't be around then, though — either because Science Marches On and we will be on planets far away, or because we will kill ourselves.

Note: some fictional extraterrestrial cultures will worship their central star as our ancient cultures worshiped the Sun. While it is definitely not the same star, for its significance for the given aliens it falls into this category.

Commonly referred to as Sol in Speculative Fiction as in "Navigator, set a course for the Sol System."

For the home of the Page Three Stunna, see British Newspapers.