Useful Notes / The Moons of Jupiter 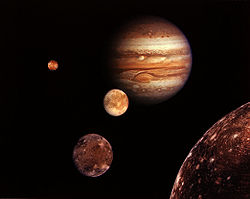 "All of these worlds are yours, except Europa. Attempt no landings there. (Use them together. Use them in peace.)"
— 2010: Odyssey Two (The addition comes from the film version of the novel.)
Advertisement:

At last count, there were seventy-nine of them, of which 52 are named. Many of these have only been found in the last decade. They are all named after the lovers and descendants of Jupiter/Zeus (God of Horndogs!), so you can tell he really got around. (The names of the lovers and descendants are generally the same or negligibly different between Greek and Latin, so there's not much of an issue, but in case of discrepancy both names tend to get used.)

The first four to be found (Io, Europa, Ganymede and Callisto) were discovered by Galileo himself, and thus are called the Galilean Moons. They dealt a significant blow to the notion that the Earth was the center of the universe, although contrary to popular belief they did not disprove the idea altogether; the existence Jupiter's moons did not have any bearing on the question of whether Jupiter itself orbited the Earth. Galileo wanted to name them after his patrons, the Medicis, but later generations of astronomers thought otherwise. One night after Galileo discovered them, a German by the name of Simon Marius — who'd independently gotten the idea of pointing a telescope at the heavens — also saw the same four moons, and named them after four of Jupiter's lovers from Classical Mythology; it's these names that are still in use today.

The discovery of the four Galilean moons was a major blow to the geocentric model of the universe. Until Isaac Newton defined his Laws of Gravity, it was widely held that Earth could not revolve around the Sun because the Moon would be left behind. Once it was observed that Jupiter was clearly dragging four objects along its orbit, it raised the question of why Earth couldn't do the same with the Moon. (That being said, it wasn't definitive proof; there was also strong evidence that while the planets revolved around the Sun, the Sun and Moon might revolve around the Earth. Solid proof of the Sun-centered Solar System would not come until the 19th century, when astronomers measured parallax in a star that showed the stars to be super-far away. By that point, most astronomers had accepted heliocentrism, but they were basing it on a sense that that solution, which was more elegant, was more likely true, rather than solid evidence.)

Four irregular-shaped moons, being pretty small and not large enough to form into spheres. Due to tidal forces, the first two will eventually drop into the planet or break up into ring particles. The largest, Amalthea, was discovered in 1892 and is very, very red. The radiation levels this close to Jupiter will kill you faster than you can say "non-functional DNA".

Amalthea didn't get its name until the mid-20th century; before then it was simply known as "Jupiter V" (as in the Roman numeral 5). Arthur C. Clarke wrote a short story by this name, which posited it was an alien starship (yes, the entire moon). 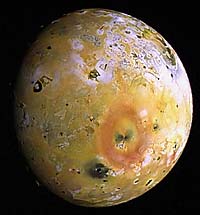 A real hot spot in the Solar System, in a lot more ways than one.

About 3640 km in diameter, Io is one of the Galilean moons. Slightly larger than our moon, its relatively close orbit to Jupiter means that it is the largest moon as seen from the surface of its parent planet in the solar system. Its (relatively) high density also makes it the moon with the highest gravitational pull in the solar system, again slightly ahead of our own moon.

Because of the pull of Europa and Ganymede, Io suffers from huge tidal forces, resulting in constant volcanic eruptions jutting out hundreds of kilometers into space. The colourful surface, resembling a pizza due to massive deposits of sulfur, is constantly changing as a result. Most of the material in Jupiter's magnetosphere comes from Io's volcanoes, including the radiation belts and a gas and plasma ring near Io's orbit; as Io's surface gravity is only 18.3% as strong as Earth's, its volcanic gases can easily reach escape velocity. The radiation levels (3600 rem/day) this close to Jupiter as a result will kill you, but you'll have a few hours to savor the unfairness of it all before your nervous system collapses.

Its surface features are named after gods of fire, thunder and lightning, the Sun, or blacksmithing (Ra Patera, the volcanoes Pele and Surt, etc.) Given its extreme geological activity, it's questionable how long any of these surface features will last. Based on observations via the Voyager and Galileo probes, Io only needs a mere sixteen years to replace all of its surface features.

Io was the setting for the movie Outland, and is also the homeworld of Arnold Judas Rimmer, from Red Dwarf. The radiation levels may explain much about the Rimmer family, especially Arnold. Also the last world touched by the Traveler. In the Edutainment Game The Magic School Bus Explores the Solar System, Io is where you make your landing when you travel to Jupiter.

Attempt No Landings on Europa 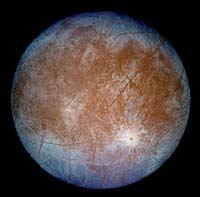 Just smaller than the Moon, Europa is covered by a cracked, frozen ocean (smoother than a billiard ball would be if it was the same size) and has a tenuous atmosphere (on Earth it would be considered a pretty decent vacuum). It may support simple life under the surface. Here the radiation levels (540 rem/day) are less, so you'll have up to a week or so to get your affairs together

. Attempt no landings here. However, the ocean under the ice is considered a good place to colonize: the thick ice crust protects from radiation; the water provides, well, water, and a ready if potentially expensive source of oxygen; and the same forces keeping the ocean liquid substantially cuts down your heating bill.

Its surface features are named after places and myths of the Celtic mythos (Tara Regio, the crater Pwyll, etc.). Surface gravity is 13.4% of Earth's.

As shown in the page quote, Europa played a prominent role in 2010: The Year We Make Contact. The moviemakers making it 2001's target instead of Saturn's Iapetus was Vindicated by History; its subsurface ocean is today considered the most likely candidate to host extraterrestrial life in this Solar System, even more so than Mars,note To put it in perspective, it's taken as read that if Mars had life, it's going to be microbial, and already Curiosity's analysis of the Martian soil makes it extremely unlikely that even that is there. On the other hand, the Europan sea might very well bear more complex life (sure, it'd probably be anoxic, but there's nothing suggesting that anoxic biochemistries couldn't make complex forms) — and we have nothing that suggests it might be otherwise. although since about 2015, Enceladus has given Europa a run for its money in that department.

Due to its interesting status in the solar system, Europa has been the subject of many proposed probe launches to study or even drill into its surface. Most famous was probably the joint ESA/NASA Europa Jupiter System Mission – Laplace

(EJSM/Laplace) that unfortunately never got of the planning stage. Or at least not in its original context, as both NASA and ESA has probes planned to jointly study the moon with the Jupiter Icy Moons Explorer

and the Europa Clipper

. Both of which will make several flybys at around 2029 and 2026-31 respectively depending on launch window. 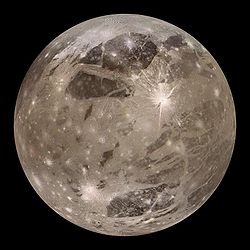 The largest moon in the Solar System. Larger than Mercury, it could count as a planet on its own if it weren't already attached to one. Its surface shows evidence of past geological activity. A popular sci-fi (and one-off Power Rangers in Space) setting, even if it is really just a bigger version of the Moon, in other words, deader than tanktops. In Power Rangers in Space, it is shown that Zordon hid the components of the Mega Voyager Zord here in case of emergencies. The radiation here (8 rem/day) won't kill you directly, but you might want to invest in a surrogate gamete donor (those eggs and sperm cells spoil easy!) or an MRI machine (so you can get a cancer scan every six months or so).

Despite being larger than Mercury, Ganymede isn't as dense. It's less than half of Mercury's mass* 45%, specifically, and its surface gravity is only 14.6% of Earth's. (Mercury, by contrast, has 38% of Earth's surface gravity, the same as the surface gravity on Mars.) As the Moon has approximately 16.6% of Earth's gravity, you could expect to be able to pull off similar feats of acrobatics if you happened to find yourself here.

It is the only moon known to produce its own magnetic field. The second strongest of any rocky body in fact and roughly 3% of that of Earth's; which sounds about right considering it has 2.5% of earth's mass. The origin of the field and why similar moons don't have one we have no idea, but it might suggest the presence of a liquid iron core similar to that of earth's that's kept in such a state by the same tidal forces that keeps Europa's ocean from freezing. The moon would probably also have some really spectacular auroras as the field interacts with the Jovian plasma.

Its surface features are named after locations and myths of Ancient Egypt and Mesopotamia (Tiamat Sulcus, Memphis Facula, etc.). Many of these features are tectonic, possibly formed by tidal heating or by expansion of the moon. Most features, tectonic or crater, appear to have formed several billion years ago over roughly the same time.

It was discovered March 2015 that Ganymede has a subsurface ocean like Europa. This was found out by measuring Ganymede's aurora; normally, an aurora is very wobbly, but Ganymede's aurora is stable, which is only possible in the presence of a large quantity of salt water.

(JUICE). Who after doing several flybys of the three outer moons will become the first probe to enter orbit around a natural satellite that isn't ours. 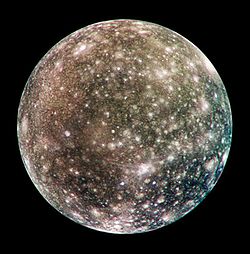 Almost as big as Mercury and the third biggest moon in the Solar System, this dead world is outside the main radiation belts of Jupiter and is the outermost Galilean moon. At larger scales, it's covered by craters on top of other craters. At smaller scales, the surface shows more variety, with plains and knobs, probably formed by the erosion of yet more craters. The general calmness of the place (0.01 rem/day average) makes it a good location to colonize, but most writers tend to ignore it. In fact, it has seven times less radiation than even our own Earth. Callisto is the only Galilean moon not part of an orbital resonance with the others. Due to the resulting lack of tidal forces from the other three Galilean moons, Callisto's surface has remained largely unchanged since it was bombarded in the early days of the Solar System, making it a valuable source of information about the conditions of that time. This lack of tidal heating also makes Callisto the largest non-differentiated body in the Solar System.

Like with Ganymede and Europa, The Jupiter Icy Moons Explorer

The Rest of the Mess (Themisto, Leda, Himalia, Lysithea, etc.)

Also known as irregular satellites, they're believed to be captured asteroids and are probably not permanently attached to Jupiter. They're grouped into 4 separate families (except for three ungrouped outliers) based on their orbits, and they all stay far away from the big guys in the middle.