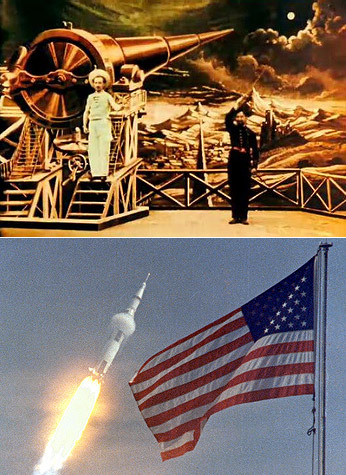 1902: Shoot a manned projectile at the Moon with a cannon.
1969: Launch a manned rocket to the Moon.
Planet Master: Feel the strength of Jupiter, the speed of Mercury, the cold of Pluto!
Blue Beetle: News flash: Pluto's not considered a planet anymore.
Planet Master: Insolence!
— Batman: The Brave and the Bold, "Aquaman's Outrageous Adventure"
Advertisement:

Speculative Fiction often uses the real-world scientific knowledge that was actually available when it was written. There is nothing wrong with that, and indeed powering and justifying your world with Hard Science is, to many people, preferable to Applied Phlebotinum and Techno Babble. Basing your fictional science on real world science is an excellent way to create Willing Suspension of Disbelief.

There's one problem with this approach, however: Science progresses. Around the 1500s, some cultures thought that the sun revolved around the earth. Around the 1900s, there still were scientists who openly questioned the existence of subatomic particles, like electrons and photons. As recently as the start of the millennium, the existence of dark energy, and the corresponding fact that the expansion of the universe is accelerating rather than slowing, was not widely known in the scientific community. And many of our current assumptions about Life, the Universe, and Everything will inevitably be questioned or disproven in the future. Therefore, when a scientific theory used widely in speculative fiction gets Jossed by new scientific discoveries, it's because Science Marches On.

Scientific terminology is also subject to change, and it can be particularly jarring if a story set 20 Minutes into the Future uses names that were widespread a few years ago, but are obsolete now, and are likely to remain so. For example, the word "atomic" has been mostly supplanted by "nuclear". Likewise, older science fiction written in the US did not foresee the adoption of metric measurements.

As a result, what seems like bad research in older fiction (in particular Artistic License – Space and Artistic License – Biology) is actually this: They did do the research; it's just that said research is now outdated. Technology Marches On is a subtrope. Zeerust may be considered a sub-trope of this, as the old ideas of "futuristic" look dated now due to new advances in unforeseen directions. For instances where the change is in the historical record, see Dated History.

This can also include cases where writers predicted an advance in engineering that never happened for practical reasons, such as having our entire civilization powered by nuclear reactors by 1990, or having cities on the Moon in 2000. It's at least conceivable that such a thing could have happened in hindsight, but it would have been so expensive and unrewarding that it seems as absurd as things that have been actively contradicted by new scientific discoveries.

See also I Want My Jetpack, Conviction by Counterfactual Clue, Artistic License. This can overlap with Accidentally Correct Writing, where instead of being proven wrong, something presented in fiction is proven to be correct by science. Sometimes there is also overlap with Sci-Fi Writers Have No Sense of Scale, when a number that might look ridiculously small/large to modern audiences made good sense in a previous scientific paradigm.

Medicine and Health
Anime and Manga