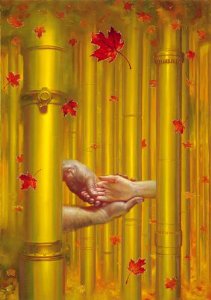 A Sci-Fi trilogy created by Canadian author Robert J. Sawyer, about an Alternate Universe where Neanderthals survived to modern-day and became the dominant species while normal humans (i.e. us) went extinct in prehistory.

The first novel begins when a Freak Lab Accident accidentally teleports one of these advanced Neanderthals into our world. The rest of the series deconstructs and explores the differences and similarities in the parallel hominid societies.

The Neanderthal Parallax includes examples of: