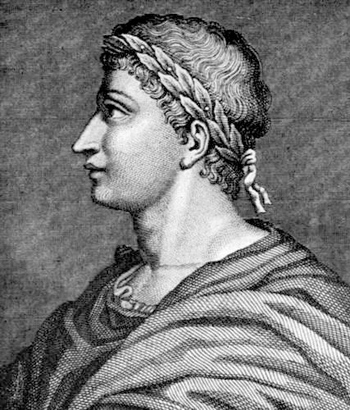 Publius Ovidius Naso was a Roman poet, more frequently known today as Ovid, and a contemporary of Publius Vergilius Maro. He lived from 43 BC to circa 18 AD.

His early works included the Amores (The Loves), the Epistolae Heroidum (Epistles of the Heroines), the Medicamina faciei (Cosmetics), the Ars amatoria (The Art of Love), and the Remedia amoris (Remedies for Love). He also completed his epic The Metamorphoses in the year 8 AD.

After this, however, Ovid was banished. The poet blamed carmen et errornote A poem and an error for his exile, though exactly what caused Emperor Augustus to banish him remains unknown. During this time Ovid wrote Tristia and Epistulae ex Ponto, which were clearly affected by his despair over his exile. Neither Augustus nor his successor relented, and Ovid finally died in Tomi, around 18 AD.

Today, Ovid's works remain among the well known classical works — his The Metamorphoses, for instance, serves as our best source for countless myths.