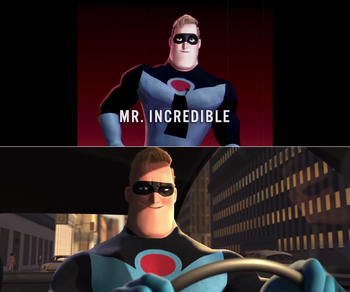 This is when the screen's Aspect Ratio changes to indicate a shift between eras or realms, to provide an artistic feel to the story or emphasize the intensity of the situation. The switch can be done either by the frame dynamically moving to fill the screen, or by a quick cut to another aspect ratio.

Transitions that happen between installments can signal that a work that started in analog television's 4:3 ratio has been adapted to HDTV's 16:9 ratio. It was common for Pan and Scan home video releases of some older movies to have parts in widescreen that would lose too much of the picture when cropped, most often the credit sequences, while the rest of the movie was shown in pan and scan.

This can be used to signal transitions between different eras, as different aspect ratios were common in different eras. For example, 4:3 (or its close cousin 1.375:1, aka Academy ratio) can be used as a Retraux touch to signal that something was made in The '50s or earlier if it's on film, or Turn of the Millennium or earlier if it's TV. The latter is often combined with Deliberate VHS Quality. It could also signal a medium switch from film to TV or visa versa.

Another possible use is the use of Cinemascope (2.39:1) ratio to display that something is epic, or to signal a switch to a Show Within a Show. Ironically, making something wider than Cinemascope conveys constraint and/or claustrophobia.

A trend starting in The New '10snote The trend-setting example is The Dark Knight in 2008, but wouldn't become common until the Tens involves making the screen taller to make something feel more epic, in contrast with the "wider is epic" mindset instilled since the Widescreen Revolution of The '50s (or widescreen TV in the 2000s for that matter). This is seen in the IMAX versions of major motion pictures filling an entire IMAX screen, doing its best to fill a viewer's entire field of view.

Related to Art Shift and Eyedscreen. Compare Monochrome to Color when the color palette changes within a work. See also Letterbox, when black barsnote They aren't always black. Woody Allen's Manhattan was released to home video with grey letterboxing at first. It's also common for TV shows to letterbox 4:3 content and have a cropped and blurred version of the same video play in sync inside the letterbox. They can even be filled with the TV station's ID. are added to the screen to change its aspect ratio. See also Open Matte, which not only preserves the full image that letterbox does, but also adds more image where the black bars would be. Compare Painting the Medium.