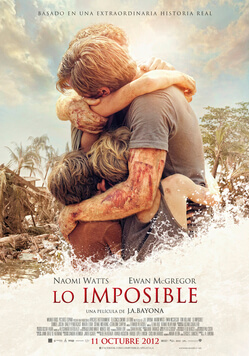 A 2012 film about one family's impossible story during the Boxing Day Tsunami. The English Bennet family are on Christmas holiday in Thailand when the tsunami hits. Mother Maria Bennet, an ex-doctor, is swept out in the tidal wave with oldest son Lucas. Meanwhile, father Henry, by some miracle, manages to survive the wave hitting the hotel, and is there with another group of survivors and the two youngest sons, Thomas and Simon. Maria gains a whole host of nasty infections in a hospital, Henry sets out to find out whether she and Lucas even survived, leaving the two little boys with a group of kids who get taken up to higher ground.

from Spain during the events of the 2004 Indian Ocean Tsunami.