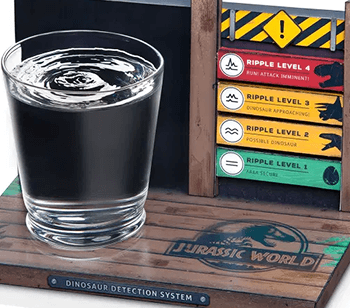 "Look out! Possible dinosaur approaching! Attack imminent!"
"Anybody hear that? It's a, umm... It's an impact tremor is what it is... I'm fairly alarmed here."
— Ian Malcolm, Jurassic Park
Advertisement:

Whenever there's an earthquake, a particularly large Monster of the Week, or The Horde coming, this will often be demonstrated subtly (or not so subtly) by showing a small object (like a lamp or a small pile of coins) vibrating, then jumping around as the vibrations get stronger (or the monster gets closer). Alternatively, this can be done with ripples in a pool of water. Sometimes the camera starts shaking (and possibly the people, too), for added emphasis.

Made easier in console video games by the vibrating "rumble" motors built into most controllers.