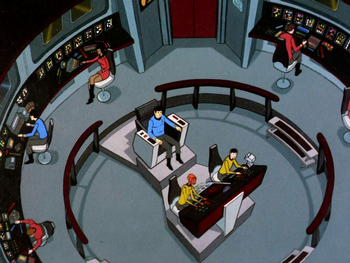 As The Couch is to sitcoms, so is The Bridge to Wagon Train to the Stars type shows: a gathering place for main characters. The Captain can usually be found here, and this is the native environment of Bridge Bunnies; together they spend their time making the Cool Starship go, noting that the Readings Are Off the Scale, evading Negative Space Wedgies, manipulating the Applied Phlebotinum, and so forth.

The standard bridge cliché involves The Captain sitting in the very center on a Command Chair, with two crewmembers (sometimes Bridge Bunnies) in front of him steering the ship, looking at an Applied Phlebotinum viewscreen showing a whizzing star field or a map of nearby space. Other characters sit at workstations arranged in a circle around the perimeter. There's an elevator or other extremely convenient access, and any character who wants to come to The Bridge can do so easily. The Bridge will be spacious and have a large stage, usually in front of The Captain's chair, so the officers, their invited guests, and the random uninvited enemy of the week can walk around and meaningfully emote.

Essentially The Bridge is part of the Space Is an Ocean model of space flight, in which the traditions of naval architecture are Recycled IN SPACE!. It will typically either be perched on the obvious "top" of the ship, often in some sort of conning-tower, or in the nose like the flight deck of an aircraft.

The Bridge will typically cram navigation, weapons control and even strategic-level command functions into a single room, all controlled by the same handful of people, despite the fact that putting them next to a giant window seems to be a disaster waiting to happen.

There are No Seat Belts on the bridge, so that the dramatic effect of Star Trek Shake will be maximised.

See also The War Room. Not to be confused with Take It to the Bridge, or with Dropped a Bridge on Him.

Of course, the reason this trope is so prevalent is because it works so well for storytelling purposes. The producers of Star Trek: Voyager tried playing around with the setup, but they realized that it's pretty much the optimal design for the kinds of stories that Star Trek tells.