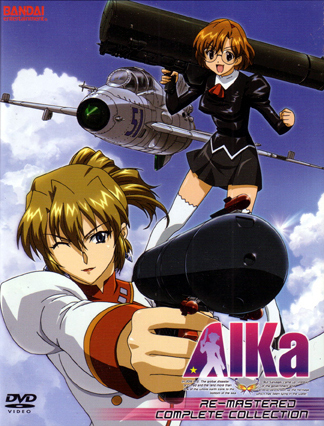 The girls - and their panties - are back!
— Tagline on a trailer for one of the OVAs.
Advertisement:

Agent Aika (or AIKa) is an OVA series produced by Studio Fantasia and directed by Katsuhiko Nishijima. It was released from 1997-1999.

20 Minutes into the Future, the Earth has been ruined due to a catastrophic earthquake; lots of places are now submerged deep under the sea. Enter Aika Sumeragi, a beautiful woman who works as a "Salvager", a scuba diver hunting for valuables under the sea, in a little family-owned company managed by the father-daughter team of Gozo and Rion Aida. Since Gozo's policy of good service for a low price manages to drive the company to bankruptcy, he decides to accept a high-paying mission: finding a material named Lagu.

After recovering the Lagu, Aika and Rion are captured by an effeminate but oversexed man named Rudolf Hagen, who wants the Lagu so that he can bring about The End of the World as We Know It and repopulate the planet with his own descendants; to that end, he has created an army of scantily-clad and skilled women called the Delmo Corporation.

Aika has a secret, though: when she was younger, she was the victim of some nasty experiments, and as a result, she possesses a super corset that transforms her into a superpowered version of herself. When Hagen discovers Aika's secret, he thinks she will do fine in his harem. After Aika rejects the prospect, she takes it upon herself to find a way to defeat Hagen, his even more disturbing sister, and his entire army with the help of Rion, Gusto, a Salvager who has a crush on Aika, Bandra, and the enigmatic spy Miss Maypia.