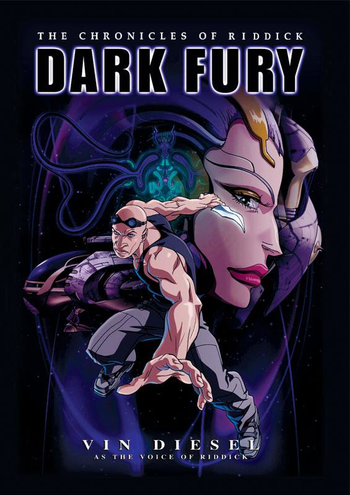 "There is a man inside this vessel, who is something far worse... than anyone here has ever encountered. Should you survive this day, it is one you will remember for the rest of your lives."
— Junner, talking about the skiff his crew picked up
Advertisement:

After escaping Hades, Riddick, Jack, and Imam are picked up by a transport vessel. They soon discover that it's a mercenary ship. Riddick attempts to disguise himself as William J. Jones but his guise undone by voice recognition technology and the trio are captured. They plan to hand Riddick over to the ship's owner Antonia Chillingsworth, who intends to add him to her "collection". Chillingsworth enjoys taking criminals and freezing them as living statues to present as artwork, A Fate Worse Than Death.

The film provides some further explanation to exactly why Riddick decides to leave Jack behind and it shows the first instance of Jack's more violent side emerge.