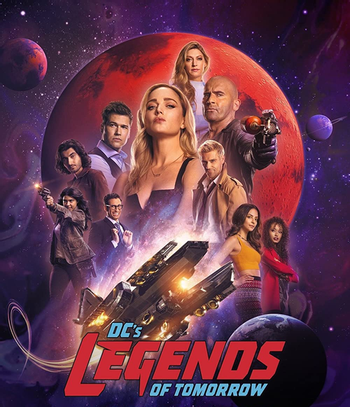 "How will we be remembered? Will it be for saving the world twice? Nope, we're the team who broke time. That's right, history has been torn to shreds, which means it's up to us to put it back together again piece by piece, fixing these so-called anachronisms before we get torn to shreds. So please, don't call us heroes. We're Legends."
— Sara Lance, Opening Narration for season 3
Advertisement:

Legends of Tomorrow (or DC's Legends of Tomorrow) is a 2016 superhero TV series from The CW based on DC Comics, spun-off from Arrow and The Flash and is the third live-action installment of the Arrowverse. It premiered on The CW January 21, 2016.

Time Master Rip Hunter (played by former Doctor Who companion Arthur Darvill, as a Casting Gag) pulled together a seemingly random group of characters from the previous shows to form a specialized team, one that would use the futuristic "time ship" called the Waverider to Time Travel. This takes them to all sorts of different places and time periods, either Set Right What Once Went Wrong or stop others who desire to Make Wrong What Once Went Right, running into many famous figures and includes a number of Historical In Jokes. They come to call themselves Legends, as during their adventures their exploits can be glimpsed through history, although Shrouded in Myth.

Although many of the characters have roots in DC comic books, the team-up itself has no comic book precedent. As a result, the writers have near-complete creative freedom to work the story out as they please. Though the show's first season feels close in tone with the other Arrowverse series, the writers increasingly rely on a bizarre, Denser and Wackier storyline from the second season onward. Unlike other series which did such a transition, the decision meant the show now has a very distinctive tone, something that the first season was criticized for its lack of.

Because of its revolving door cast, many characters have come and gone over the course of the series.

Before Legends started, both Arrow and The Flash devoted episodes to setting it up — Arrow brought Sara and Ray back in the show's fourth season, The Flash debuted Jax in his own feature episode and Kendra in a few episodes as a girl Cisco dated, and the season's Crisis Crossover of the year 2015, Heroes Join Forces, introduced Hawkman and Vandal Savage and led to Kendra becoming Hawkgirl, revolving around the shared history of the three. Due to their very fluid method of travel and exploring Alternate Timelines, other members of the Arrowverse cameo or guest star with regularity in the series itself, not to mention often visiting their respective City of Adventure without anyone aware they had stopped by. The Legends have participated in three of the Arrowverse's six intra-franchise crossovers: Invasion!, Crisis on Earth-X, and Crisis on Infinite Earths, with the last of these marking the premiere of the show's fifth season.

On April 29, 2022, it was announced the series would not be renewed for an eighth season, becoming the fifth Arrowverse series to end.

Citizen Steel (as Robo!Nate insists) try to do a lecture on bullying. However, the two kids decide to team up and use the baseball bat to see how tough his skin is.

Example of:
And Knowing Is Half the Battle

Citizen Steel (as Robo!Nate insists) try to do a lecture on bullying. However, the two kids decide to team up and use the baseball bat to see how tough his skin is.