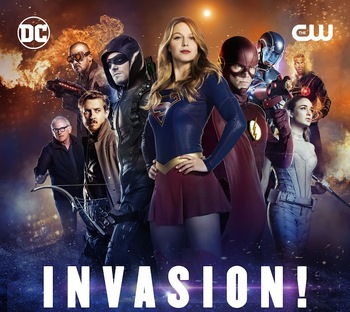 Felicity: Aw, that is so cute. You guys are just gonna get together and go fight some aliens - have you lost your mind?! They're aliens, and there's only four of you.
Barry: Not if we get Stein and, you know, all the others.
Oliver: They're calling themselves the Legends.
Advertisement:

Invasion!, also called Heroes vs. Aliens, is the third annual crisis crossover television serial of The CW's Arrowverse. Unlike the previous previous crossovers which were two parters this crossover is told across four shows: Supergirl, The Flash, Arrow, and Legends of Tomorrow. It is based off the classic Invasion! from the 1980s.

An alien ship crash-lands near Central City getting Team Flash's attention. Learning from Lyla that these aliens, the Dominators, have come back after visiting Earth before in the 1950s, and not content to sit by and let ARGUS take care of it, Barry takes it upon himself to recruit Team Arrow, The Legends, and his new friend Supergirl from Earth-38 to drive off the alien invaders.