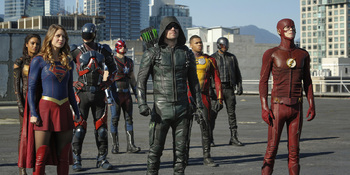 And you still thought you'd have to wait until 2017 to see the Justice League, didn't you?
This episode is the fourth of a four-part Crossover event between Supergirl (2015), The Flash (2014), Arrow, and Legends of Tomorrow. The episodes in chronological order are "Medusa", "Invasion!", "Invasion!", and "Invasion!".
Advertisement:

After learning the Dominators' plan for the world, the Legends must work together with the Flash, Supergirl, and Green Arrow to kill them once and for all. Meanwhile, Stein figures out, with the help of others, how the team can defeat the Dominators, but is distracted by the aberration he realizes he created in 1987.