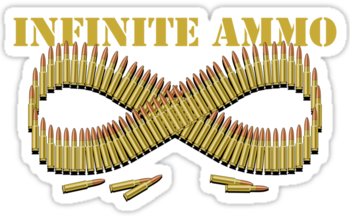 "You know, a lot of professional officers, even up to field rank in the combat branches, seem to think that ammo comes down miraculously from Heaven, in contra-gravity lorries, every time they pray into a radio for it."
— Carlos Von Schlichten, Uller Uprising

Possibly one of the oldest and most abused tropes when it comes to gunplay is the frequent ignorance of just how many shots the good guys/bad guys have fired from their guns without stopping for a reload. In Real Life, most revolvers hold between 5 to 8 shots, depending on caliber, while semiautomatic handguns have magazines that usually hold 10–15 shots. Pump-action, bolt-action, and lever-action longarms generally hold 5–8 rounds (but the magazine can easily be topped off) and detachable-magazine semi-automatic or automatic rifles generally hold at least 20, if not 30 rounds.note That great big circular drum magazine seen on the classic Thompson Submachine Gun in gangster movies holds 50 rounds in real life, and an even bigger one holds 100...but sadly these tend to be cumbersome and likely to jam. But keep a running count, and you'll sometimes see a weapon go for much longer without hesitation.

Ammo capacity of guns on TV seems to be totally dependent on how much drama and suspense is needed. The hero will always have plenty of ammo to mow down the mooks, but will run out just before reaching the Big Bad, or confront him with One Bullet Left. Reloading is usually only done when it adds to the drama or when you need to show off how badass the gunslinger is. If someone is firing an automatic weapon that's belt-fed or has a large banana-shaped magazine in it, forget it — he's never going to run out until you shoot him dead. The only thing that seems to stop a movie or TV gun from firing is the inevitable and dramatic jam.

Can be partially explained by editing in some of the less unrealistic movies. If multiple shots of a gunfight flow well together, shot counts might be ignored, rather than breaking the flow by putting in a reload shot. Likewise, editing has temporal considerations, and if the camera cuts to a different angle while the shots are occurring, you may be seeing the same shots repeated from different perspectives, making the actual number of shots fired lower than what was perceived.

This is a common characteristic of Energy Weapons; seldom do you see a ray gun run out of zap juice.

An adjunct to this would be the Bottomless Quiver for archers. Many an archer in animation and videogames can pour out a stream of arrows without ever hitting the supply cart.

See also Infinite Supplies, Hammerspace. Unorthodox Reload is an aversion of this trope. Not at all related to Topless Magazines.

This may end up becoming an acceptable break from reality in many Video Games; who wants to pull their fighter plane over to the side to top up on the 20mm ammo in the middle of a Shoot 'em Up?

Even in video games where you do have to reload, typically shooters, the game doesn't keep track of individual magazines. You can reload at any point without wasting bullets or having to move bullets from one magazine to another. When the game invokes Universal Ammunition, the rules just get that much fuzzier. If you're unlucky, though, some people's magazines might be more bottomless than others.

A common justification in science fiction stories is that future firearms actually fire extremely tiny projectiles (hundreds or even thousands of which can be packed into a single magazine). Since kinetic energy is a factor of both mass and velocity, firing mechanisms that allow the projectile to be shot in a very, very high velocity can compensate (or more) for the size of the bullet. Stronger characters sometimes have the 'cheats' of an absurdly large magazine relative to their body size (e.g. having their gun belt-fed from a backpack) or internal magazines whose capacity cannot be accurately calculated. Neither of these can actually be bottomless, but since viewers can't tell the actual number of rounds, they're less likely to have their Willing Suspension of Disbelief broken.

This trope often goes hand-in-hand with More Dakka. Compare against Counting Bullets, which is about limited magazines.

There's a separate "Exceptions" subsection on the bottom of this page. Please post aversions and subversions there.

It's a common and understandable mistake to mix clips and magazines up, especially since most people already refer to magazines as clips in movies or video-games. Regardless, it's a Berserk Button among many firearm enthusiasts.