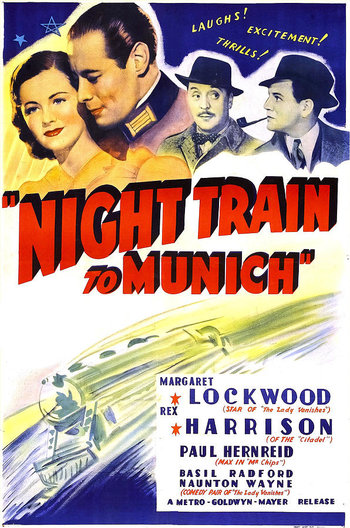 Anna Bomasch (Lockwood) and her father, Axel, (James Harcourt) need to escape Czechoslovakia: Axel is the inventor and manufacturer of an armour-plating the Nazis will find very useful as they slowly roll into their annexation of the country. Axel escapes, but Anna isn't so lucky and is thrown into a concentration camp. Happily for her, she finds a friend among the prisoners, Karl Marsen (Henreid). They both escape to London, England, where Anna knows her father must be. She contacts him through songster and British agent, Gus Bennett a.k.a. Dickie Randall (Harrison). But it turns out that Karl is not what he seems: he was planted in the concentration camp to escape and have Anna lead him to her father.

And so, they are both tricked and forced to return to the Continent. Gus, in the meanwhile, feels responsible for their kidnapping, so he devises a covert plan to disguise himself Major Uhlrich Herzoff of the Wehrmacht to try to free Anna and her father from the Nazi grip and Karl's unflinching coldness.

See The Lady Vanishes for a similar setting of pre-war conditions and intrigue (and some of the same actors).