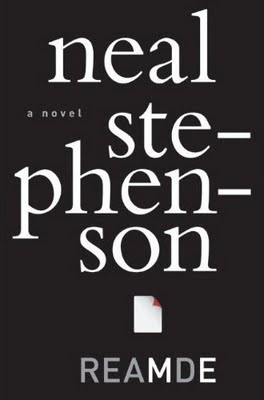 REAMDE is a novel by Neal Stephenson in which the worlds of international crime and Massively Multiplayer Online Role Playing Games intersect.

Richard Forthrast, a former marijuana smuggler, has founded the world's most successful MMORPG, T'Rain, which is built around the concept of allowing players to make real currency exchanges within the game's virtual world. Recently, a virus called REAMDE has infected millions of players in T'Rain, holding their computer files for a ransom of game currency.

Through a series of events, Richard's adopted niece Zula runs afoul of Russian gangsters whose criminal secrets have been hacked by REAMDE. She and a group of fellow hostages are abducted halfway across the world to help locate the hackers and deliver Mafia-style vengeance. What transpires is a globe-trotting cat-and-mouse thriller as Zula struggles to stay alive and Richard uses all of his own resources to scour the globe. Along the way, they face crack mercenaries, international spies, infamous terrorists, back-country survivalists and more.